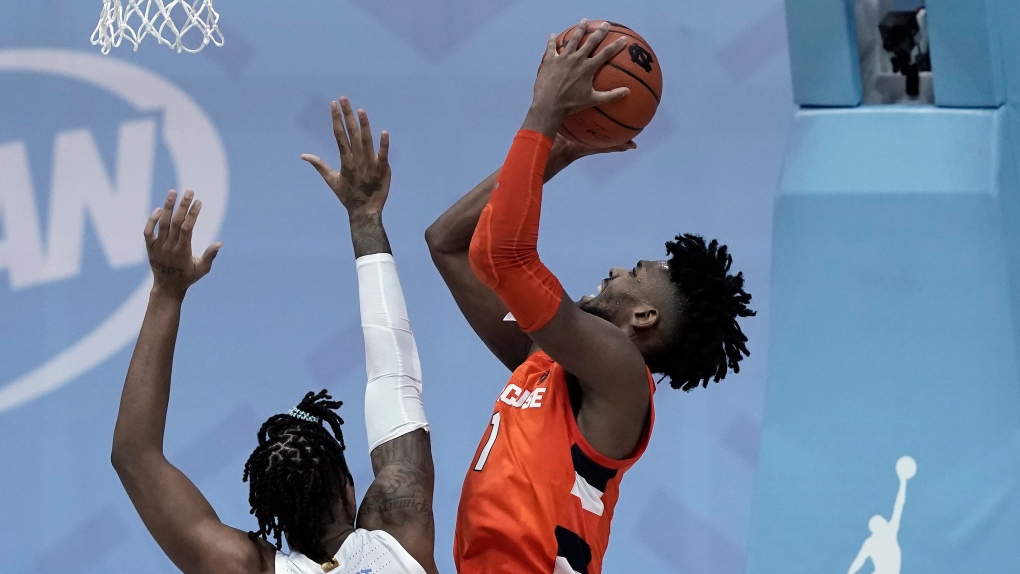 SYRACUSE, N.Y. -- Not so long ago, Syracuse forward Quincy Guerrier may have been best known for shaking hands with imaginary teammates after shooting a free throw with only opponents lining the lane.

Notwithstanding the hurdles posed by the coronavirus pandemic and the lack of a seasoned centre to help carry some of the load inside, the 6-foot-7, 220-pound Guerrier has had a breakout season for the Orange (11-6, 5-5 Atlantic Coast Conference) as they chase a post-season berth. He's had four 20-point games, only twice failing to reach double digits, and his seven double-doubles rank second in the ACC, two behind leader Justin Champagnie of Pittsburgh and tied for seventh nationally.

"It's probably just my work ethic," said Guerrier, a Montreal native who started his foul-line ritual i n high school. "I was watching a lot of videos to improve my (basketball) I.Q. and stuff like that. I'm working hard every day."

As a freshman last year, Guerrier averaged 6.9 points and 5.3 rebounds per game, had three double-doubles, and shot 49.7% despite a groin injury that plagued him all season and required off-season surgery. Now in good health after a long recovery and lots of yoga, he's started every game this season and is averaging 15.7 points, 9.1 rebounds and shooting nearly 53, a big improvement from freshman year (63 of 104 for 60.6%).

The Orange were dealt a big blow in the first game of the season, a one-point home win against Bryant, when starting centre Bourama Sidibe tore the meniscus in his right knee after just four minutes. Sidibe, who began to emerge as a force over the final 10 games last season, has appeared once since then -- he had one point, one block, one turnover and four fouls in 11 minutes in a 17-point loss at Clemson last Saturday.

"He's doing everything he can, but he hasn't done anything in 12 weeks or close to it," coach Jim Boeheim said. "He's moving, he's trying. I'm not sure he's going to be able to do much. It's been a long time."

Sidibe's absence has made Guerrier's role more important. With 6-10, 200-pound senior forward Marek Dolezaj lining up at centre and overmatched physically, Syracuse has often struggled on the boards. The Orange rank last in the ACC in rebounding defence and Clemson exposed those weaknesses in a dominant first half that produced a 20-point lead at the break. Syracuse outscored the Tigers in the second half, but the loss was a setback after an impressive 76-73 comeback victory at home over North Carolina State.

The Wolfpack led 47-38 at halftime and Guerrier responded with some inspired play that keyed a tying rally after the break. He started a 16-7 spurt with a jumper and layup, assisted on a basket by Dolezaj, had a block and a steal, and snared three rebounds that set up five points, including a basket by Alan Griffin that tied the score at 54.

Guerrier finished that game with 10 points and 10 rebounds before fouling out late and on Tuesday night reprised his role again against the Wolfpack, this time on the road, with 14 points and seven boards in a 77-68 victory in the team's most complete performance of the season.

"The real key for us is what we do inside," Boeheim said. "When we outrebound people or stay close, we haven't lost a game. Every game we lost we got crushed on the boards and inside. This is a tough league. Every game is a challenge."

The Orange have had four games postponed and two long pauses. That makes attaining and retaining any sort of rhythm that much more difficult.

"I think it's hurting everyone," Guerrier said. "When I can ... I'm running by myself or (going) on the Peloton, doing some stuff like that to help me stay in shape, be ready."

Still, coach Boeheim would rather have him stick to the paint.

"I think he's a heck of a player," Boeheim said. "When he wants to just shoot 3s he's not helping himself and he's not helping our team. When he gets inside like he did in the second half (Tuesday night), he dominated and was a big key."