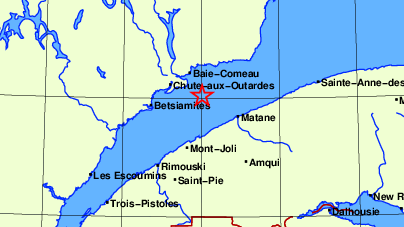 A map showing the epicentre of a 3.5-magnitude earthquake near Baie-Comeau, Que., on Thursday, August 11, 2022. (Source: Earthquakes Canada)

A 3.5-magnitude earthquake took place in the St. Lawrence River near Baie-Comeau, Que., at 3:37 a.m. on Thursday, Earthquakes Canada reports.

According to the department, it was "lightly felt" in the city of Baie-Comeau, nearly 700 kilometres northeast of Montreal.

A total of 13 people reported they had felt an earthquake on Aug. 11 on the Natural Resources Canada (NRCan) website.

Earthquakes Canada stated it hasn't received any reports of damage, and "none would be expected" for an earthquake of this magnitude. Its epicentre was at a depth of 13.5 kilometres.

This marks Quebec's 11th earthquake of the year.

However, the most recent occurrence in the region with a magnitude greater than 5.0 took place back in March 2005.