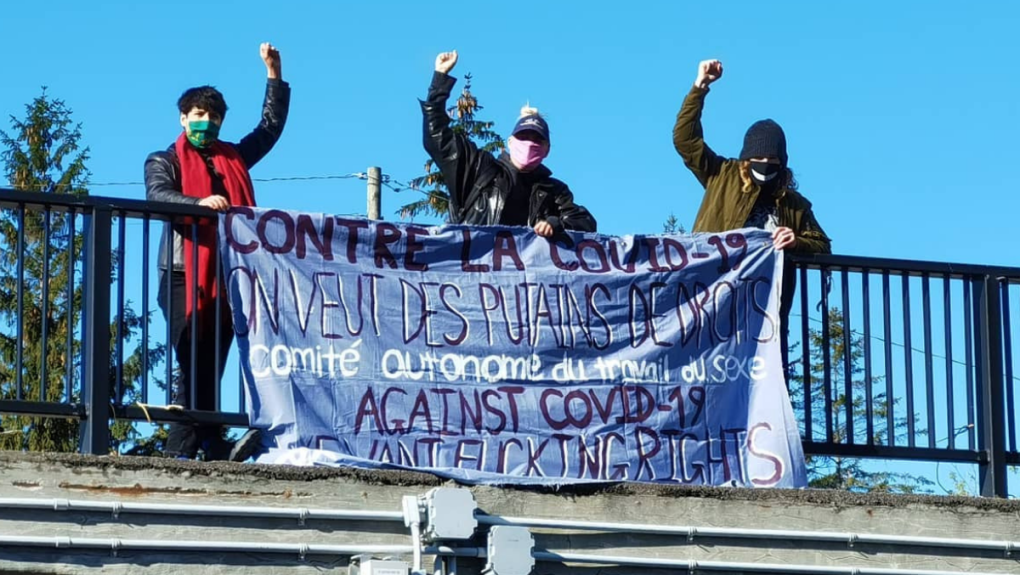 Sex workers in Montreal are protesting and demanding basic working rights as the criminalized industry has been hard hit by COVID-19 restrictions. SOURCE: CATS

MONTREAL -- Adore Goldman is a sex worker in Montreal and is one of those objecting to public health measures such as the Quebec curfew put in place during the COVID-19 pandemic.

She and others in CATS (Comité autonome du travail du sexe) are protesting Saturday at La Fontaine Park in the city's Plateau borough.

"We are demanding the decriminalization of our work, and the better working conditions in the sex industry," said Goldman. "We particularly put the emphasis today about how the criminalization and the end of repression of sex workers is vital to fighting COVID-19 within our communities and workspaces."

Goldman pointed out that throughout the novel coronavirus pandemic, some sex workers were fined for being out after curfew and that no support was extended to workers.

Montreal police (SPVM) spokesperson Jean-Pierre Brabant said officers typically try to avoid punitive measures for sex workers, but added that there were no curfew exceptions given to them during the pandemic.

"We’ll take the human approach instead of just being police officers," he said. "If we see that the person is not trying to help themselves or (willing to) deal with the police, we’ll give them a ticket."

Getting off the streets, however, is not always a choice for many sex workers, said Goldman, with many facing poverty and other issues.

"It is very stressful because we have basically the choice between being exposed to the virus, or lose our income," she said. "Many of us, it's our only option because we are already marginalized."

Sex workers, she said, cannot apply for the CERB, and many are migrants without permanent status.

The protest Saturday hopes to highlight how decriminalizing sex work would avoid many issues including the further spread of COVID-19.

"We want it to be recognized as a legitimate form of work, and this is why we are advocating for decriminalization because we think it will even be safer in our workplaces, and we would be able to access rights," she said.

CATS would also like to see sex workers prioritized for COVID-19 vaccinations and the regularization of immigrant workers with precarious residency status.

Harsh laws and penalties have never lessened the amount of work, Goldman said.

"There is not less sex work because of this," she said. "The law doesn't change (and) the industry is always there... For us it's just a basic question of rights."