Thousands of festive green-clad, flag-waving souls lined the route as usual but they were wearing more layers of clothing than in past years, as temperatures sat around -12 C with a windchill of about -20 C along the route.

The weather was so cold that it silenced many bagpipers who marched silently, unable to manipulate their sonorous instruments in the bitterly-frosty temperatures.

CTV Montreal was once again among the dozens of local institutions and establishments partaking in the festivities, as on-air personalities and other staffers once again took the route from Fort to Phillips Square.

Mayor Denis Coderre was in attendance, as were many other politicians and other dignitaries, including Philippe Couillard.

Premier Pauline Marois was not in attendance following her meeting with Mayor Denis Coderre earlier Sunday.

No accidents or other incidents were reporting in the parade which began rolling at noon and finished over two hours later.

CTV Montreal was not kept away from the winners’ circle Sunday as the trophies were handed out. The station won as Best Media Entry as decided by the United Irish Societies. 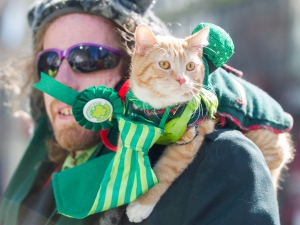