MONTREAL -- Three zones in Quebec will all fall under Quebec's 'red' alert COVID-19 zone. The measures will be in effect as of midnight Wednesday night.

Quebec Premier Francois Legault made the announcement Monday evening at a news conference, calling the situation 'critical' and saying the time has come to make difficult decisions.

The Greater Montreal area (including Laval and the South Shore), the Quebec City area, and Chaudiere-Appalaches are all affected. 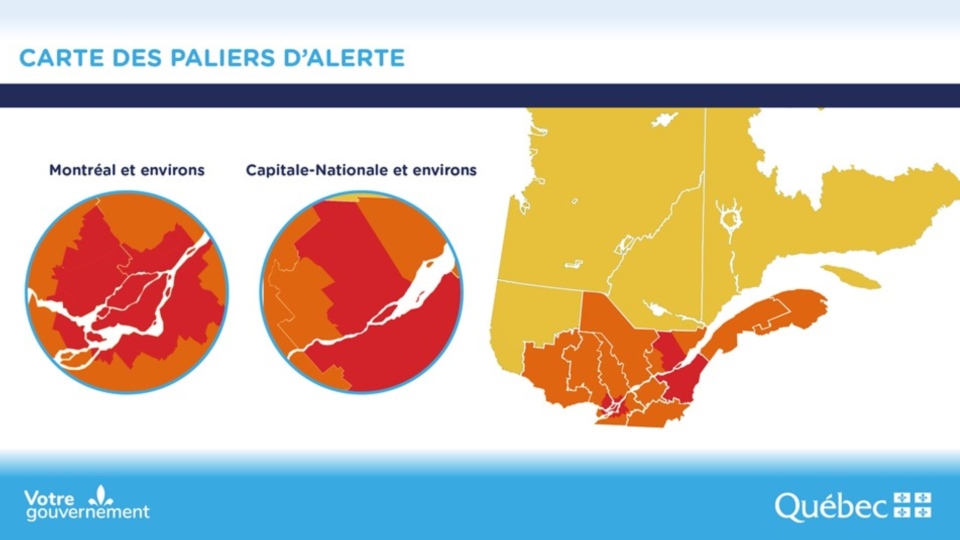 "The general rule is we must stay at our house," he said. "We give ourselves four weeks with these measures to see if we can stop the second wave. I truly hope we do, but I cannot and will not make false promises."

Under the red alert, visitors to private homes are now banned, with exceptions for caregivers and contractors for work that was already planned. People who live alone can also see another person who lives alone, for example couples who do not live together, Health minister Christian Dube added. 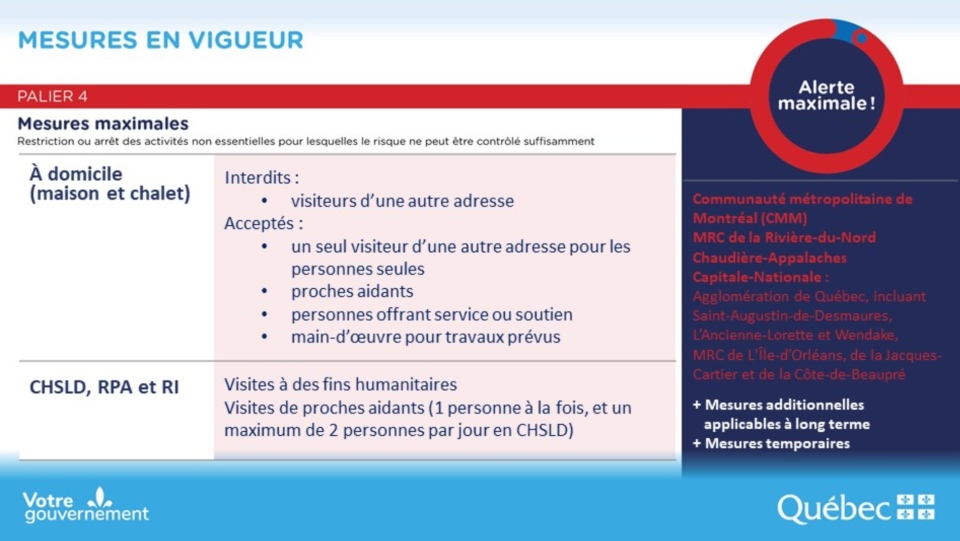 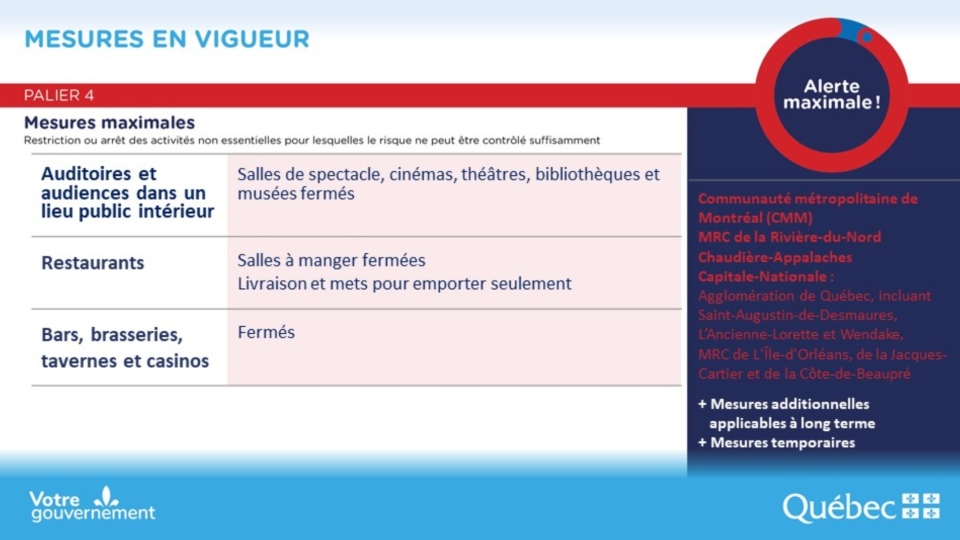 Private gatherings are banned and public gatherings have a cap of 25 people. Travel out of red zones is also discouraged.

"We recommend strongly people don't travel between regions" said Legault, adding that police could be patrolling or establishing roadblocks in the future. 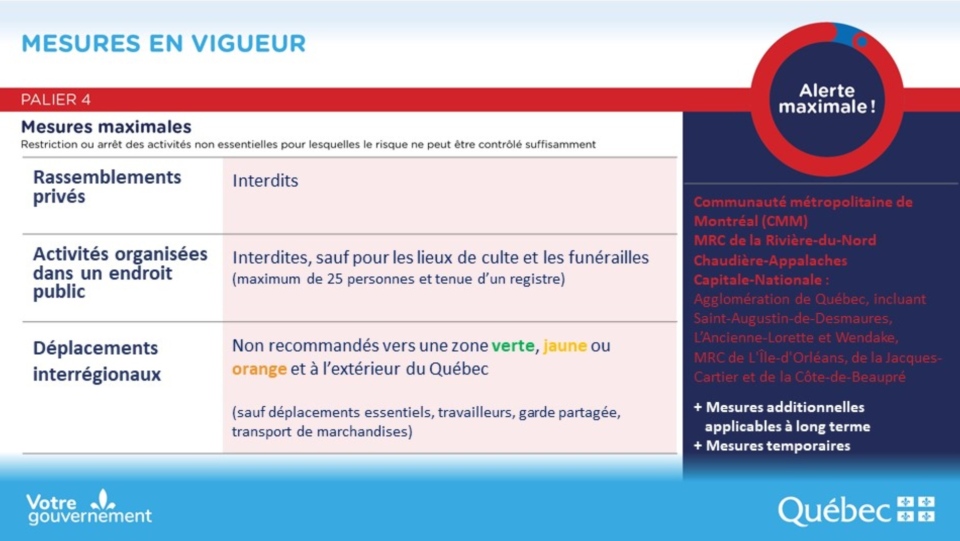 "If we don't want our hospitals to be submerged, if we want to limit the numbers of deaths, we must act right now," he said. 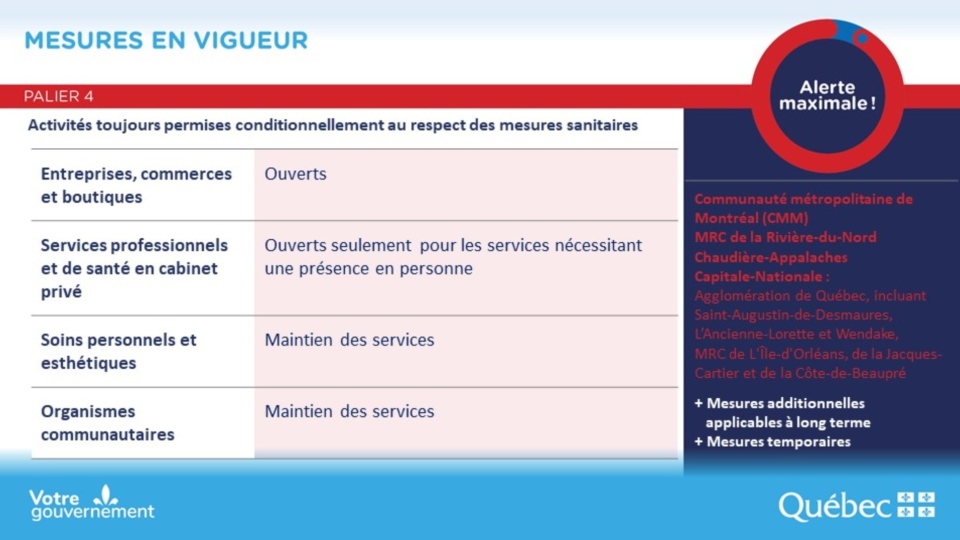 For the multitude of people asking me: hockey arenas remain open in red zones. There is no change to sports venues. I just confirmed this with Francois Legault's press attache. @CTVMontreal pic.twitter.com/q6dJmJYA4c

Quebec's education minister has said that this will not affect schools -- Quebec's schools will largely stay open no matter how bad the next wave of the pandemic gets, Jean-Francois Roberge said earlier this month.

"I want things to be as normal as possible in schools," said Legault, adding that that includes sports and other activities.

Legault said the province's public safety minister is looking at how to enforce masks at outdoor gatherings, including demonstrations. 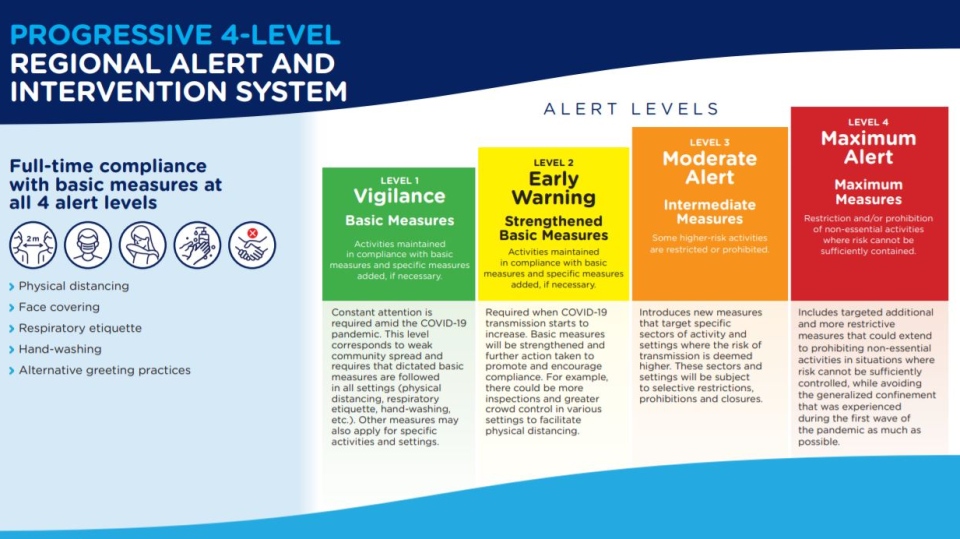 Sunday marked the highest daily increase in cases of COVID-19 since May 6 when 1,036 were reported, and 750 new cases were reported Monday.

The total number of positive COVID-19 cases in Quebec since the start of the pandemic is now 72,651, and 5,826 people have died due to the disease.

The total number of hospitalizations is now 212, and 37 people are in the intensive care ward.