Ace fighter pilots straight out of scenes from Top Gun are headquartered in a nondescript building off the highway in Dorval and train air forces around the globe.

The scenarios at Top Aces are not simulations, but real-life simulations.

"We replicate the bad guys," said co-founder Didier Toussaint, who flew CF-18s for the Royal Canadian Air Force. "Just like in the movie Top Gun way back then, and in the new movie, the CF-18s or the fighter aircraft need opposition and that's what we provide."

The elite group of flyers run mid-air training exercises, and the private company's headquarters is in a simple building on the Transcanada Service Road.

Didier decided to use his expertise in the sky to prepare the current class of pilots when he founded the company.

"The CF-18 (pilots) have to practice their air-to-air gunnery, and our aircraft, the alpha jet that you see here, will tow a banner behind the aircraft at a safe distance, and the CF-18s can practice shooting at that target," said Toussaint. 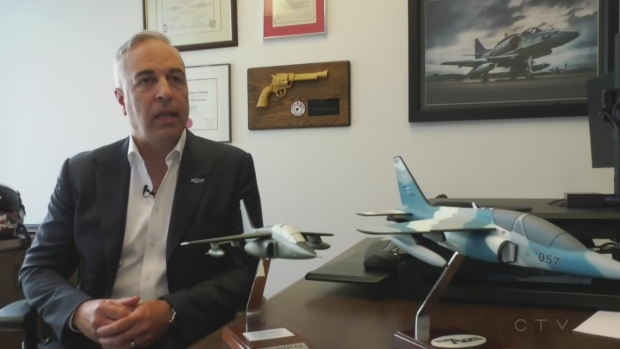 The planes are also used in target practice for navy vessels, and in dogfight drills at up to 40,000 feet.

In 80,000 hours of flight time logged, the company's safety record remains unblemished. The company has not lost a single aircraft.

"Our role is to ensure that when they go training every single day, that the opposition is to the right level, and replicates the enemy that they could face elsewhere," said Toussaint.

The only thing that isn't real is the ammunition.

"It's all done live with aircraft, but the simulation of the weapons and their impact," said Toussaint.

In 2005, the Canadian Air Force was the first in the world to bring on a private firm to train with its pilots.

Toussaint said the government of Canada has saved over $2.2 billion in a decade. The company uses retired fighter jets, and has a more streamlined operation that saves money the Canadian Air Force needs to spend, he said.

"Armed Forces, their focus is to go to war and to prepare to do so or defend the country," said Toussaint. "Our purpose is to serve our customer, and therefore we're able to use the same pilots and technicians in a more focused and efficient manner."

Toussaint believes the role of third-party combat training companies is only going to expand. Top Aces are among only three or four similar companies in the world.

"There's been a significant move to outsource," he said.

Top Aces currently owns and operates 31 fighter jets, and has plans to add 30 more of the state-of-the-art F-16s to its fleet. That would make it the second-largest fleet in the country, second only to the Royal Canadian Air Force, which has 76 CF-18s in use.

The company has contracts in Canada, Germany, Australia, and will expand to the United States.