Quebec Storm: 173,000 homes remain without power, most will have it tonight

MONTREAL -- The record number of power outages has greatly improved over the last few hours in Quebec, but there were still more than 173,000 Hydro-Québec customers without power as of 6 a.m. Sunday morning, two days after the passing of a fierce autumn storm accompanied by strong winds.

The vast majority of households without electricity will be reconnected by Sunday night, but failures will continue indefinitely in many areas where the damage has been greater.

The Minister of Energy and Natural Resources, Jonatan Julien, will report on the situation Sunday afternoon at the Government Operations Centre in Quebec City.

At the height of the crisis, 990,000 homes and businesses were affected by these failures. Premier Francois Legault called it the "worst situation since the famous ice storm of 1998" at a press conference on Saturday. 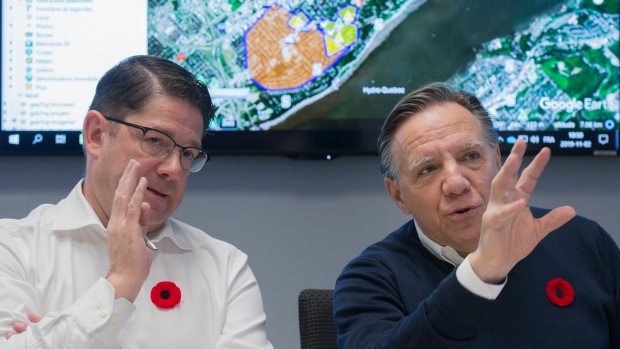 Legault said that people will have to be patient in Estrie, Montérégie, as well as in the Beauce, Centre-du-Québec, Lanaudiere and Laurentides regions, as the damage was worst there.

While the cold begins to settle in Quebec, the premier has invited affected citizens to seek refuge with relatives or in shelters, following the usual safety instructions.

This report by The Canadian Press was first published Nov. 3, 2019.