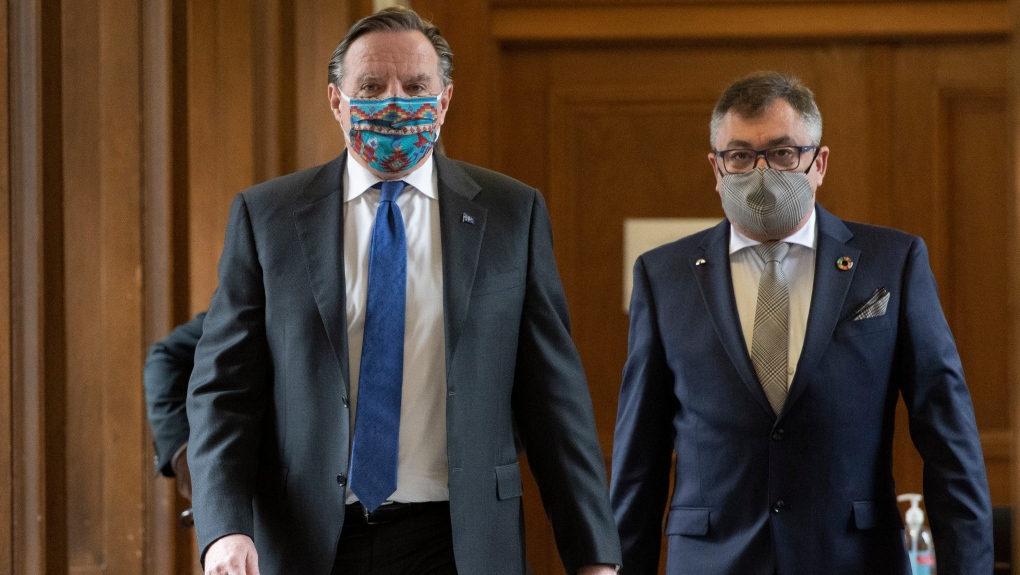 MONTREAL -- Quebec's public health director says the situation is under control after temporary foreign workers at a farm and food-processing company south of Montreal tested positive for COVID-19.

Horacio Arruda said Thursday the regional health agency responded quickly when the first confirmed case of COVID-19 was reported in late May at Vegpro International in Sherrington, Que., in the Monteregie region.

"The cases were taken care of, and they continue to be presently," Arruda told a news briefing in Quebec City.

Vegpro International, which distributes produce in Canada and the northeastern United States, said in a statement Thursday that it was contacted by the public health agency on May 28 after a Guatemalan worker tested positive for COVID-19.

The company operates several farms and food packing plants in Quebec's Monteregie region, as well as in Florida.

It said that after an internal probe into the worker's potential contact with others, it asked the public health agency to set up a mobile testing unit to test other workers.

"Unfortunately, this was not possible," it said.

Vegpro International said that other workers were tested for COVID-19 on May 30 using the regular system.

"All our confined workers are subject to daily medical followup to ensure their good health. We are relieved that everyone is doing well right now," its statement read.

The company did not say how many workers tested positive or how many still have COVID-19 symptoms, but it said the outbreak was more complicated because the workers live in communal housing.

The health authority for the Monteregie did not immediately respond to a request for comment from The Canadian Press Thursday. It told Radio-Canada that a mobile testing unit would be sent to the farm Thursday to test 15 other workers for the novel coronavirus.

Joey Calugay, a community organizer at the Immigrant Workers Centre in Montreal, said it is not surprising that a COVID-19 outbreak occurred on a Quebec farm.

Physical distancing is difficult when workers are sometimes sleeping five to a bedroom, Calugay said, or when dozens of people are working close to one another all day.

"You're not going to be able to stop the outbreak without proper measures, without addressing issues of housing," he said.

In April, Canada set aside $50 million to ensure that temporary foreign workers could comply with a mandatory, 14-day COVID-19 quarantine.

Agriculture Minister Marie-Claude Bibeau said at the time that the money -- $1,500 per worker -- could be used to offset salaries or supply appropriate accommodation for the quarantine period.

Calugay said it was "a bit naive" to think that screening foreign workers for COVID-19 when they arrived from abroad "and then not think(ing) about ... their working conditions (and) their living conditions" would be enough.

In the case of the Vegpro International workers, he said, more action was needed.

"I think as soon as the company had said, or somebody had reported, that somebody was showing signs of the infection, then the resources should have been mobilized immediately and mass testing should have been done," he said.

COVID-19 outbreaks have also been reported among temporary foreign workers in Ontario, British Columbia and Manitoba.

Between 50,000 and 60,000 temporary foreign workers come to Canada annually to work in agriculture and food processing, the federal government says.

That accounts for over 60 per cent of all foreign workers who come to Canada under the Temporary Foreign Workers Program.

This report by The Canadian Press was first published June 11, 2020.