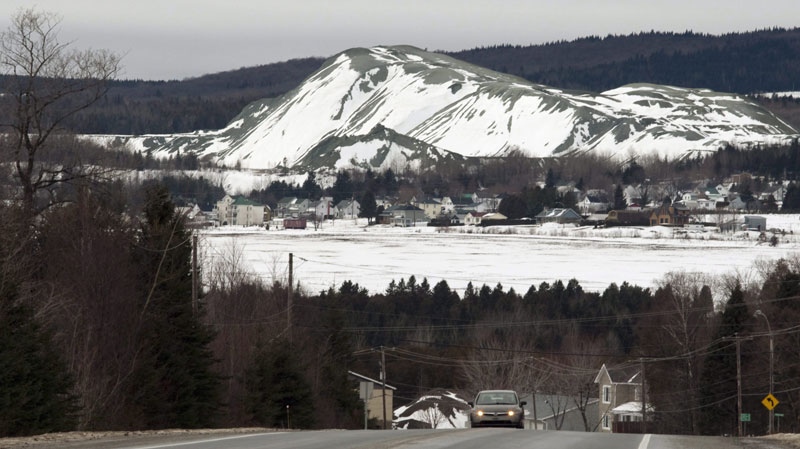 A mountain of mining residues from asbestos in East Broughton, near Therford Mines Que. December 13, 2010 (THE CANADIAN PRESS/Jacques Boissinot)

MONTREAL - The embattled asbestos industry is being dealt another blow, with a powerful Quebec labour union poised to retract its longstanding support.

The Confederation of National Trade Unions will vote later this week on a resolution calling for an end to the development of the chrysotile fibre asbestos industry in Quebec.

The industry has now almost completely disappeared in Canada _ with just one mine still operating in Quebec and a second in the same province awaiting word on whether it might be revived by a government loan guarantee.

The union is wading into that debate at a sensitive moment.

"The time has come to update our position,'' said Claudette Carbonneau, the CNTU president, in an address Wednesday to members at a three-day convention.

"This would honour those who fought and died for health and safety, and point out that the life of an Indian worker, just like that of a Quebecer, cannot be blindly sacrificed in the name of a job.''

Critics of the industry call it immoral that Canada exports the substance to developing countries when it's considered carcinogenic and too unsafe to use here.

However, defenders of the industry say the form of asbestos being mined in Quebec, called chrysotile, is perfectly safe if handled according to proper safety standards.

The union position was swiftly denounced by the head of a consortium seeking to reopen a mine in Asbestos, Que.

The move is a second blow to the industry in the last few days. Last week, the federal government dropped its funding to a prominent pro-asbestos lobby group.

The union is also recommending against supporting any new expansion projects for Quebec asbestos mines and is approaching other unions to discuss ways to transition workers out of the industry.

It's a 180-degree turn for the CNTU, which has supported the safe use of the product since 1997 along with other Quebec labour organizations.

It says it's now rethinking its position in light of current scientific data.

Carbonneau says it's difficult to argue that asbestos is being used safely in developing countries.

She questioned the ability of the Quebec government to carry through with promises to monitor the use of asbestos exported abroad.

"Is that credible when we barely have our own inspectors on construction sites?'' she asked.

Although the Confederation doesn't represent asbestos workers, it has approached other unions that do and said a debate is needed.

"There was no joy anywhere,'' Carbonneau said of consultations with the Quebec Federation of Labour and the Centrale des syndicats democratique.

"But our position is not for a ban tomorrow. I stated very clearly our desire to work with them. They received it in a very civilized way and they appreciated that I warned them in advance.''

The union also wants a debate on an eventual ban on asbestos and on pressing the federal government to include it on an international list of dangerous products.

But Chadha, whose Balcorp Ltd. has been exporting chrysotile asbestos to India for 15 years, said the union is wrong about asbestos.

"We regret this decision and we would have liked the (Confederation) to get first-hand information as to the many benefits of chrysotile for countries such as India,'' said the Montreal-based businessman, who is of Indian origin.

He said his company has only sold to modern industries that respect the same safety standards as those used in Quebec.

He noted that the Supreme Court of India refused in January to ban asbestos and that the World Health Organization says it is possible to use chrysotile asbestos safely.

"We respect the (Confederation's) decision but we believe that Indian political and legal institutions, who are supportive of asbestos when adequately regulated, are in a better position to determine what is good for their population,'' Chadha said.

The union's stand is the latest hit to the industry.

In the 2011-2012 spending estimates tabled in the House of Commons last week, the federal government quietly cut its funding to the Chrysotile Institute, one of the asbestos industry's key lobby groups.

The institute, which promotes asbestos exports to developing countries, regularly got around $250,000 in funding per year.

The move came after intense lobbying efforts by such groups as the Canadian Cancer Society, which argued the government should stop helping the industry.

A spokesman for the institute did not return a call for comment.