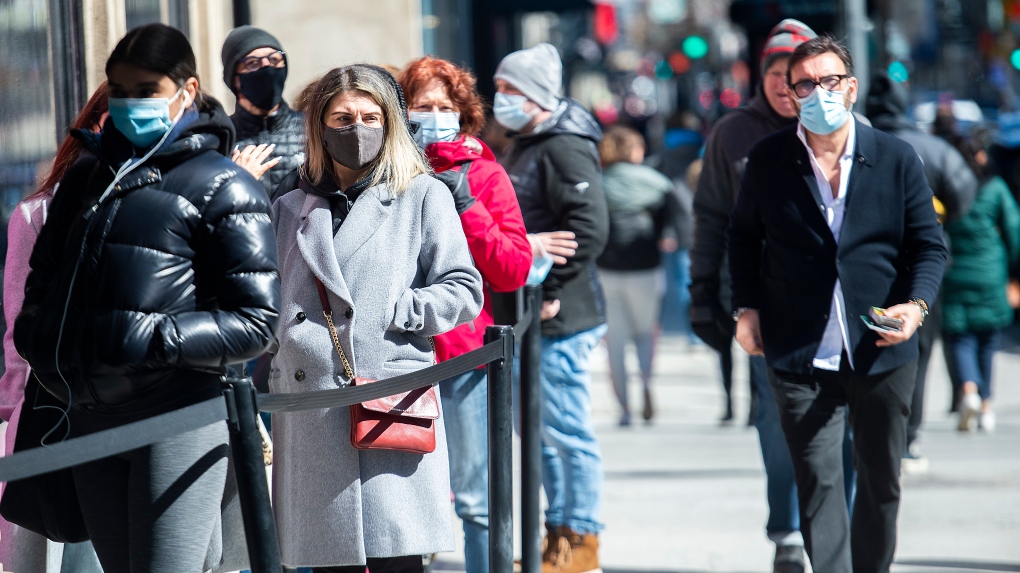 People wear face masks as they wait to enter a store in Montreal, Friday, April 2, 2021, as the COVID-19 pandemic continues in Canada and around the world. THE CANADIAN PRESS/Graham Hughes

MONTREAL -- After reporting over 1,300 COVID-19 cases for the first time since January on Friday, Quebec reported Saturday that 1,282 more people have tested positive for the novel coronavirus in the past 24 hours bringing the total number of infections in the province to 314,958 since the start of the pandemic.

The Quebec Institute of Public Health (INSPQ) is reporting that there are 9,714 active COVID-19 cases in the province, an increase of 286 from Friday.

The province also reported three more deaths due to the disease, which occurred in Montreal between March 27 and April 1. Quebec reported no new deaths in the past 24 hours.

Since the pandemic began, Quebec has reported 10,684 deaths due to COVID-19.

Premier Francois Legault asked the province's citizens on Facebook to avoid gathering over the holiday weekend, and said other cities and regions will be put under further restrictions if cases spike.

"We're going to step in real quick," he said.

Hospitalizations dropped in the province Saturday with Quebec saying two fewer people are receiving care in Quebec hospitals for a total of 501. Of those, 124 people are in intensive care wards, an increase of three.

Health-care professionals administered 47,194 more vaccine doses bringing that total to 1,488,347, which is 17.5 per cent of the population.

On April 1, 36,362 samples were analyzed. (Quebec releases its testing data from two days prior to its daily updates).

The province reports that of the 819 active COVID-19 outbreaks in Quebec, 411 are in the work environment and 213 in educational settings.