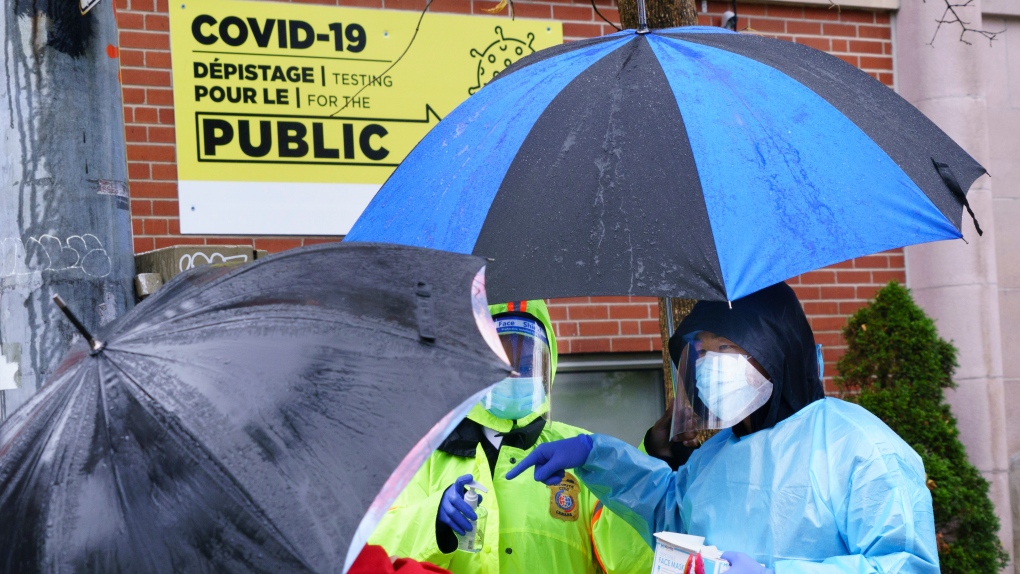 A health-care worker hands out masks to people waiting in line in the pouring rain outside a walk-in COVID-19 test clinic in Montreal, on Wednesday, October 7, 2020. THE CANADIAN PRESS/Paul Chiasson

In Montreal, their role will be to ''support COVID-19 screening interventions in the context of an outbreak, for example in an elementary school, a CHSLD or in a neighborhood, '' Urgences Sante announced in a news release.

The paramedics trained to conduct the tests are part of the organization's Community Response Unit, and have been made available since Tuesday.

"They were on the front lines during the first wave of the COVID-19 pandemic, and the troops will continue to be there for the second," the release reads.

The organization insist this deployment will not affect its normal emergency services.

In other parts of the province, paramedics are also being trained or deployed to carry out similar work.

In Granby, in the Eastern Townships, eight paramedics took a one-day training course on Tuesday and another team will do the same on Thursday.

The organization indicated that 35 of its paramedics from the Montérégie, Estrie, Laurentians and Lanaudière regions have asked to participate in the project.

The program has been in place for months in Sherbrooke, where paramedics from the Eastern Townships Ambulance Workers Cooperative are carrying out tests at the city's screening centre, confirmed the CIUSSS de l'Estrie.