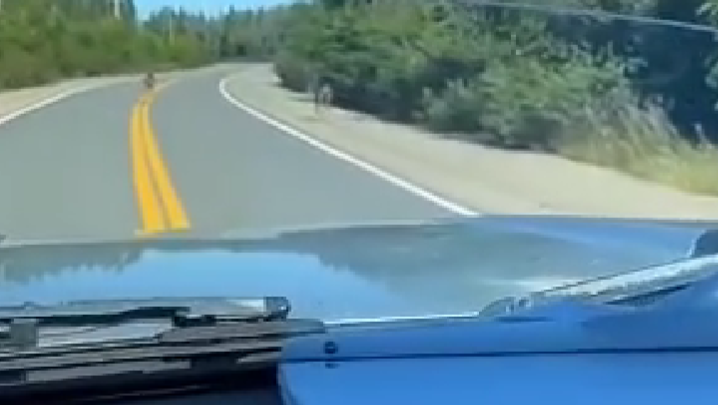 A man from Sept-Isles, Que., posted a video on social media in which he appears to purposefully hit a young moose in the Moisie area. (Facebook)

Warning: This article contains descriptions of animal cruelty. A video of the incident is included below that contains disturbing imagery.

A man from Sept-Isles, Que., posted a video on social media in which he appears to purposefully hit a young moose in the Moisie area.

The video shows the animal lying on the ground after the man drove his pickup truck forwards and backwards on top of it.

The act appears to have been deliberate, as his vehicle is shown swerving to the side of the road to run over the moose.

The video was intially posted to Snapchat, a platform where videos have a 24-hour lifespan, but was captured and then re-shared on Facebook, prompting outrage from commenters.

Quebec provincial police (SQ) have been made aware of the situation and are currently evaluating it.

SQ spokesperson Nancy Fournier said it's a matter of establishing the legitimacy of the video before identifying the person in order to consider an arrest.

A person who commits acts of this kind can be criminally charged with animal cruelty, she added.

The man who posted the video appears to use the name Montignyyo on social networks.

This report was first published by Ma Cote-Nord/ The Local Journalism Initiative on Aug. 3, 2022.