Quebec looks abroad to solve nursing shortage, but experts say it's not a quick fix 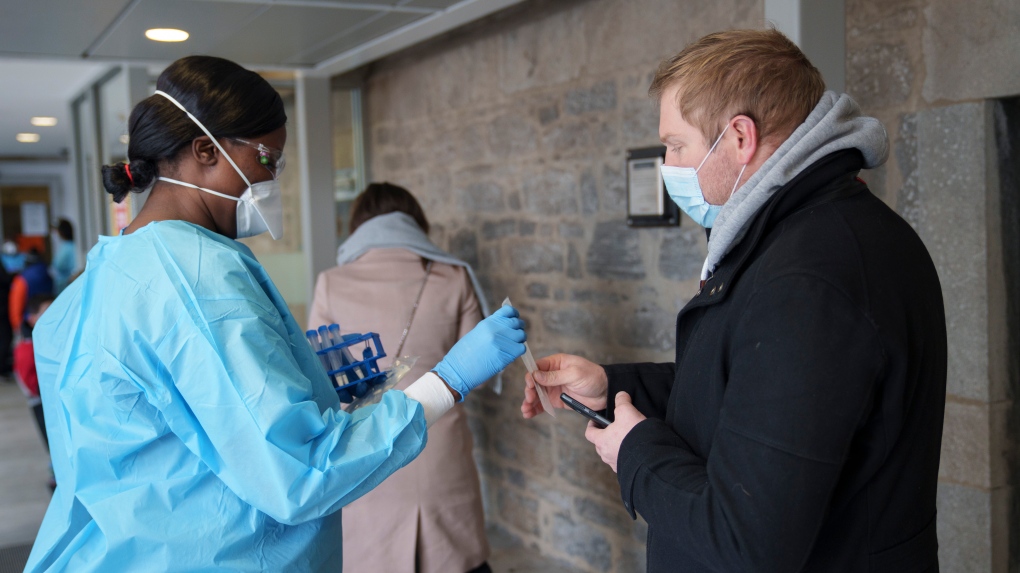 A nurse hands out a swab for a COVID-19 rapid self test at a test clinic in Montreal, on Wednesday, December 15, 2021. THE CANADIAN PRESS/Paul Chiasson
MONTREAL -

From her Spanish-language Facebook, Instagram, YouTube and TikTok accounts, Colombian-born nurse Johana Botero makes her pitch to other South American health workers to come join her in Quebec.

Some 10 years after arriving in Canada and well-established in her career, she now tries to help others navigate the long, complicated process that will allow them to practise in Quebec. Their efforts, she assures them, will eventually pay off with better pay, work-life balance and opportunities than they have in their home countries.

"It's win-win, both for Quebec and the people who want to immigrate," Botero said in a recent interview.

As the COVID-19 pandemic drags on, the Quebec government needs more nurses, and fast. The pandemic has exacerbated a nursing shortage that continues to grow in urgency as patient numbers rise and tens of thousands of nurses are off the job due to positive COVID-19 tests, other illness and burnout.

To meet the shortage, hospitals and health networks -- with the support of the provincial government -- are launching recruitment campaigns in Africa, Europe and Latin America. Some are enlisting the help of people like Botero, who is using her Facebook page with 43,000 followers to help a hospital on Montreal's South Shore recruit up to 100 nurses.

But experts and nurses warn that recruiting internationally trained health workers is unlikely to change the situation in the province immediately, despite government efforts to speed things up.

Nurses who immigrate to Quebec undergo a process that begins with applying to have their credentials recognized by the provincial nursing order, the Ordre des infirmieres et infirmiers du Quebec. After that, most are asked to follow an integration program -- either in the form of college classes or an internship in a clinical setting -- to ensure their education is equivalent to that of Quebec candidates. Then, like other nursing candidates, they can work under supervision until they write their final exams. Those from non-francophone countries must also pass a French test.

Isabel Garcia, who had been working as a nurse in Colombia for two years before she came to Quebec in early 2013, says she struggled to get documents from her home country to complete her file. Once she was approved for an integration program, she learned that the classes she'd been ordered to take were full.

She spent a year-and-a-half working in the laundry room of a hotel to make ends meet, and it wasn't until the fall of 2015 that she obtained her licence.

While the laundry job helped her learn French, "it's experiences you don't think you'll have when you're already a nurse in your country," the 34-year-old said in a recent interview.

Garcia says the process of integrating new nurses has improved since she went through it. Today, nurses have more options to establish their credentials in clinical settings instead of classrooms, and they're guided towards work in related fields, such as long-term care homes, while they complete the process.

The Quebec government announced in December that it was investing $130 million toward efforts to better recruit and integrate immigrants from in-demand fields such as nursing. That includes funding to schools to increase the frequency of training programs, and a $500-a-week living allowance for candidates who are taking full-time programs to join one of the designated orders.

Today, Garcia works with Botero to help other Spanish-speaking nurses avoid the mistakes she made. The key advice she gives them is to begin the process from their home countries, dedicate themselves to learning French -- and be patient.

Gyslaine Desrosiers, the president of the Conseil interprofessionnel du Quebec, which represents the different professional orders in the province, says that while Quebec is making an effort to recruit nurses abroad and to address the barriers they face upon arrival, it doesn't control all aspects of the system. She notes that candidates must still go through the immigration process, which is a federal responsibility.

And no matter how much effort is made to speed up the process, it remains important to verify that workers are properly trained before allowing them to care for patients unsupervised. "Immigration is rarely an immediate solution, especially when it comes to health care," Desrosiers said in an interview.

Chantal Lemay, who is in charge of admissions and registration for the Quebec nurses' order, says the order is working to speed up the recognition of foreign credentials. However, she said delays often occur in the country of origin, where candidates can struggle to gather the required documentation. "Some countries don't want to let their nurses leave," she said.

Garcia and Botero believe the Quebec government can still do more to help.

Because language is among the biggest obstacles, Botero says the government should offer more grants to allow candidates to begin studying French in their home countries while they wait to immigrate. Garcia, for her part, warns that new nurses arriving in Quebec shouldn't be shoved too quickly into the workplace -- especially during a pandemic -- without the support they need.

She said newly arrived nurses need time to adjust to different equipment, technology and language, and may need psychological support as they adjust to a new country.

"You have to know it's someone who just arrived, who is going through a lot of changes, not just professionally but personally," she said. "We're leaving family, we don't know anyone, and that plays heavily on an emotional and mental level."

Kate Moss denies Depp ever pushed her down staircase

Supermodel Kate Moss, a former girlfriend of Johnny Depp, denied Wednesday that she had ever been pushed or assaulted by Depp during the course of their relationship.

Golden State Warriors coach Steve Kerr refused to talk about basketball at a pre-game news conference on Tuesday and instead called for stricter gun control after the killing of at least 18 children and an adult in a Texas school shooting.