After two-plus years of releasing almost daily COVID-19 data, Quebec’s health ministry expanded the offering Tuesday, by introducing an interactive table that paints a portrait of the healthcare system as a whole.


The weekly dashboard, tracks the performance of various sectors within the system, including the number of people waiting for a family doctor, surgery, mental health and youth protection services.

Most data on the table will be updated each Tuesday, and some every month.

The tableau will also follow the shortage of health-care workers, and hospital activity, including waits in emergency rooms.

Certain information, about care for seniors in CHSLDs, and health prevention, will be added sometime in the future as the dashboard evolves, a health ministry press release explained.

The new interactive tool is intended to allow the population to “better follow the performance of the health network regularly,” health minister Christian Dubé, said in the release.

Users will be able to search for numbers specific to a region or the province as a whole.

Eventually, each institution and facility in Quebec will be expected to post its own data, providing an even more detailed view. 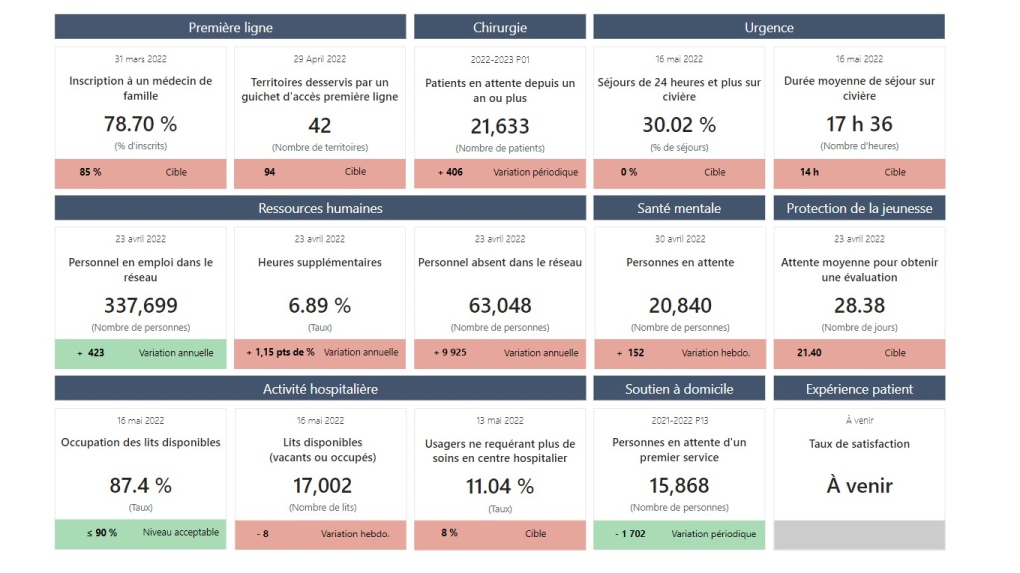 This screenshot from May 18 gives a sampling of Quebec health-care stats.

NOT A FLATTERING PORTRAIT

The latest available numbers expose the fragility of the health-care system and the need for additional front-line services, particularly in Montreal.

According to the inaugural chart, only 68 per cent of people in Montreal are registered with a family doctor, compared to 79 per cent in the province overall.

For example, in Montreal: