A church service took place in Montreal Friday morning at a Greek Orthodox church that was devastated by a fire earlier this week.

The congregation of the Church of the Dormition of the Virgin Mary gathered shortly before 8 a.m. outside the church on De L'Epée Ave. and St. Roch St.

The first Friday after Easter is considered a holy day in the Orthodox calendar and is normally commemorated with a mass.

The Tomb of the Virgin Mary is a small building that's mostly brick and stone and was not affected by the fire. The priest and his family had worked to clean the yard in front, and had arranged pots of spring flowers in the garden and placed chairs outside.

During the mass the priest was mostly inside the Tomb, praying and cutting bread as people filed in one by one, kissed the Virgin Mary icon, lit a candle and filed out.

Many stayed outside the church for hours to pray and share a moment.

The fire broke out after evening prayers on Monday and caused significant damage to the building, but is believed to be salvageable.

In the meantime the church has asked people to hold off raising money until official channels are operating, and also to prevent fraudulent fundraising. 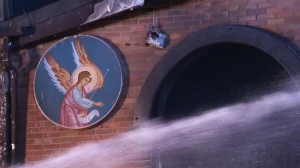