Potholes a major source of income for garages

MONTREAL - An annoying sign of spring - the dreaded pothole - is testing the patience of Canadian drivers this year while also creating a financial bonanza for auto repair shops.

Extreme fluctuations in early spring temperatures along with lots of rain have unearthed a high number of potholes that are exposing motorists to hefty repair bills.

"It's probably the worst year I've seen in the last 10 to 15 years," Ben Lalonde, president of My AutoPro service centres in Ottawa, said in a recent interview.

Business is up as customers are showing up with bent wheels, punctured tires, misalignments and wrecked suspensions. Repair bills can range between $200 and $500 depending on the force of impact and the type of damage, Lalonde said.

Spring is a lucrative period for repair shops, says Jack Bayramian, owner of Montreal's Decarie Garage, who adds that repairs stemming from pothole damage makes up about 30 per cent of his year's revenues.

While repair shops welcome the extra business, they also say it can cause customers to pare back spending on preventative maintenance.

"I know having bad roads is good for business but I think it's (temporary) ... because a lot of people end up neglecting their cars, and at the end it could be a safety concern," James Bastien, manager of an OK Tire in the nation's capital.

Most motorists tend to pay for repairs out-of-pocket unless damage is well above insurance claim deductibles, or they can beat the odds and win a claim from a municipality.

Several large Canadian municipalities are struggling this year to keep up with the menace that is consistently among the top sources of angry complaints from residents.

"This year has been fairly bad," says Bryden Denyes, area manager of core roads for the City of Ottawa.

The city has filled 51,000 potholes so far this year, up substantially from 20,200 at the same time in 2015, but down slightly from two years ago. Compared to last year's almost relentless bone-chilling cold, Ottawa has faced 28 freeze-and-thaw cycles versus just 11 a year ago.

The capital spends $5.4 million a year filling potholes and repairing roads, compared to the nearly $7 million to fix major and arterial roads in Montreal. Toronto spent $6 million in 2014 to fix 360,000 potholes.

Lionel Perez, a councillor responsible for Montreal's infrastructure, said it's a constant struggle to plug the holes, especially because of decades of under-investment.

The challenge is even bigger in Edmonton, which over the last nine years has faced an average of 455,000 new potholes a year. A warmer winter and less snow has given the Alberta capital somewhat of a reprieve this year.

In addition to filling potholes, municipalities have to contend with damage claims submitted by residents.

Ottawa paid out only 10 per cent of claims last year, while Edmonton's annual payout ratio is about 16 per cent. Toronto, meantime, paid out about half the 2,376 claims filed in 2014, the city said in its latest report. 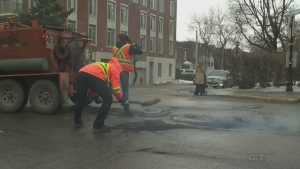