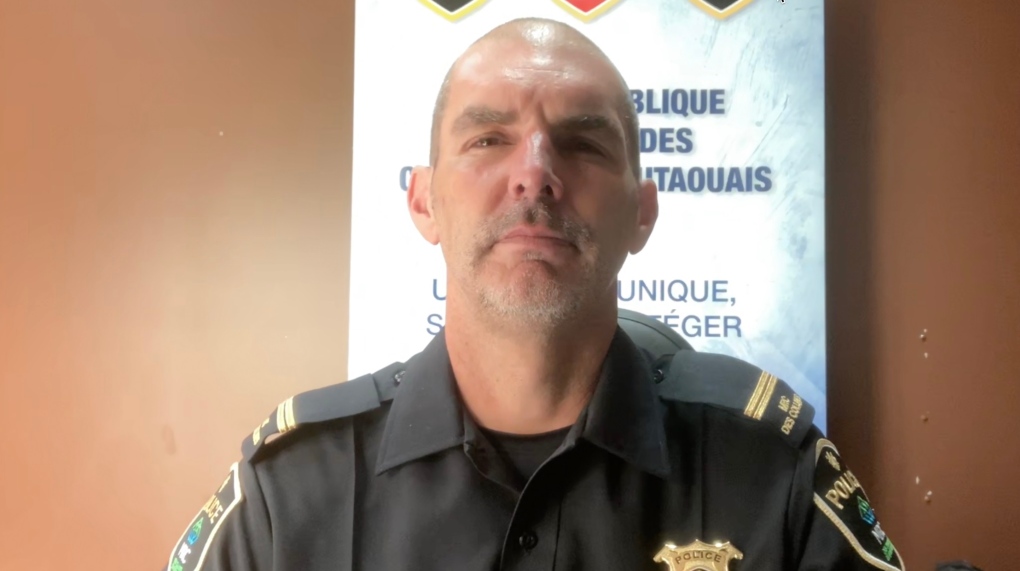 Sgt. Martin Fournel with the MRC des Collines-de-l'Outaouais said there was a concern for officer safety when they responded to a large illegal gathering in La Pêche, Que. on Saturday, Oct. 2, 2021. (Joe Lofaro/CTV News)

MONTREAL -- Police responded to a rowdy party at an Airbnb in western Quebec on the weekend that was in violation of public health regulations, but the gathering was so big they say they couldn’t break it up.

Nine busloads of people descended onto a newly built rental cottage in the quiet city of La Pêche along the Gatineau River.

Police, who were called after 911 calls about noise, estimate there were 500 people at the party Saturday night.

Gatherings are limited to 10 people indoors and 20 people outdoors in the province, but police say there were just too many people to start handing out $1,500 tickets.

“Unfortunately, we had to identify positively, like all those individuals with a piece of ID, which was physically impossible to do that evening,” Sgt. Martin Fournel, a spokesperson for the MRC des Collines-de-l'Outaouais.

“There was a safety concern for the officers. Half a dozen officers against, you know, 500 people — we don't want to put oil on the fire.”

Fournel said the party was held at a new cottage that was built in the last few months and it was the largest illegal gathering he has heard about on the territory since the start of the pandemic.

Officers monitored the event until 2 a.m. when the partygoers filed into the school buses to return to Ottawa, he said.

Most of the illegal gatherings officers have seen in cottage country in western Quebec have been held at short-term rentals from services like Airbnb, according to Fournel, adding that rental platforms make it difficult to verify how the guests will use the property.

“They're lying about it. They're saying … ‘Oh, we're going to be two couples, three couples max.’ so it's difficult for the owner to validate that info and make sure that they're not going to show up with nine school buses and 500 people,” Fournel said.

Police say their investigation is not over and the city could issue fines at a later date.

In a statement, Airbnb said it is "appalled at the blatant disregard for this host's home and neighbourhood" and that the party was held without the owner's knowledge or consent.

"We are currently working with this Host to support them through our Host Guarantee process. We have removed this guest from the platform," the company said.

The office of La Pêche Mayor Guillaume Lamoureux has not responded to a request for comment from CTV Montreal.