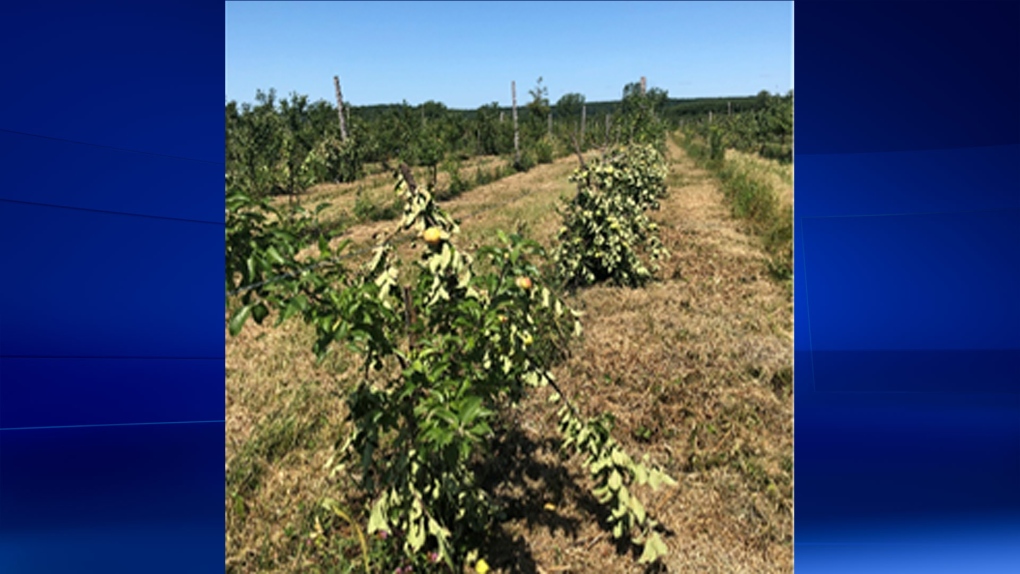 Deux Montagnes police provided this photo of fruit trees that had been cut down at Domaine Villeneuve in St. Joseph du Lac

Police in the Montreal suburb of Deux Montagnes are searching for clues after an orchard owned by the former chair of the board of directors of Montreal's Public Markets was repeatedly attacked in recent weeks.

When reached on Thursday, the owners of Domaine Villeneuve would not talk to CTV News and would not speculate about the reasons for the vandalism.

However last week the entire Board of the Directors, including Normand Villeneuve, owner of the vandalized orchard, resigned en masse citing fears for their personal safety.

This as the city of Montreal is currently seeking ways of changing how public markets are governed, and the city's controller general is investigating allegations of wrongdoing at the markets.

The first incident at Domaine Villeneuve, located in Saint Joseph du Lac, took place on July 28, and the orchard was attacked again the following weekend.

Police said that on July 28 someone made their way onto the farm and slashed the canvas covering of a shed used to store farm equipment. That caused about $40,000 in damage.

The following weekend someone snuck onto the orchard in the middle of the night and cut down 350 young fruit trees.

On Aug. 7 someone broke into Villeneuve's home. Police did not say if anything was stolen, or if anyone was hurt during the incident.

The orchard grows and sells ten different types of apples, as well as other fruits and vegetables, both at their farm and a stall in Jean-Talon market.