This comes one day after Quebec launched its most recent COVID-19 booster vaccination campaign, targeting people living in CHSLDs and private seniors' residences (RPAs) due to a possible increase in infections as students return to school across the province.

Legault emphasized the fact that vaccination does wane after a few months.

"The reason we could return to a normal life this summer is thanks to vaccination," he said. "This is a good time to launch a massive vaccination campaign."

"I'm counting on you," he stressed.

Consider getting a booster dose not only for yourself, said Legault, but for the province's vulnerable and health-care workers across the province.

"It's important; they had a tough two years, so they need your help," he said. "Please get your new dose."

Legault and Dubé note that during the electoral campaign ahead of the Oct. 3 provincial election, they will not participate in public health updates alongside Boileau, unless there is a pressing issue that requires their presence. 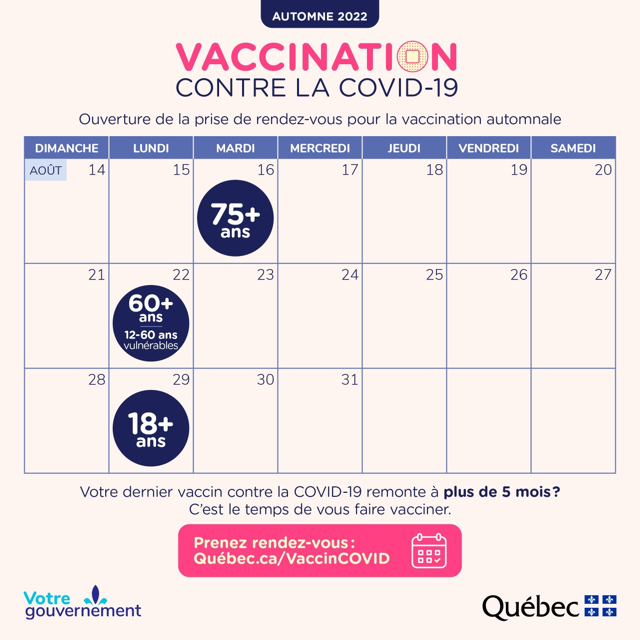 The number of Quebecers in hospital receiving treatment for COVID-19 has decreased by 29, for a total of 1,964, including 679 due to COVID-19.

Intensive care admissions are down by five for 50 patients, including 29 specifically to be treated for COVID-19.

There are 4,109 health care workers absent due to COVID-19-related reasons.

Quebec Health Minister Christian Dubé points out vaccination against the virus does not completely prevent infection, but it does decrease the risk of dire consequences.

An additional 19 per cent have received four.

The government has not included data for children aged six months to four years old.

Infectious diseases specialist Dr. Donald Vinh said he was hoping to hear more from the premier, namely a plan in case there's a bad wave in the fall.

While he's in favour of nearly everyone getting a booster dose, he says it’s "wishful thinking" given that as of Tuesday, only 56 per cent of Quebecers have gotten their third dose and only 19 per cent have had a fourth.

"I think it’s a bit perplexing because an institution of public health, the INSPQ, has warned that this fall could be very difficult with another wave," he said.

"You would have thought that if your own institution is warning you that things could be bad, the reflexive response would have been 'okay, what do we do about it?' And the answer today is nothing," he said. "Today's press conference really comes down to just crossing your fingers and hoping."

Vinh said he wanted to hear of plans to monitor wastewater, and hear that there could be at least limited mask mandates if the virus is spreading rapidly.

The defense team in the U.S. Capitol riot trial of the Oath Keepers leader is relying on an unusual strategy with Donald Trump at the center.

The Danish Energy Agency says one of two ruptured natural gas pipelines in the Baltic Sea appears to have stopped leaking natural gas.

As Hurricane Ian ravaged coastal towns in southwest Florida, residents in this quiet suburb thought they would be safe, having no beach and living outside areas under evacuation orders. But then the water kept flowing in.