Municipal unions across Quebec unite in protest against Bill 3

The provincial day of protest began early Wednesday morning with demonstrators in Quebec City trying to stop city buses from leaving the garage.

That ended soon after 6 a.m. when police officers arrived at the bus depot.

It's just one of countless acts of defiance that occurred Wednesday as part of a day of union action, called the "Big Disruption" in French, which aims to denounce the imminent adoption of Bill 3.

In Montreal the leader of the police brotherhood, Yves Francoeur, rallied police officers by saying they should be responsible, unlike the governments they are dealing with.

"Nobody asked for this. Nobody voted for this. This is Quebec. We're not in Russia," said Francoeur.

"Why do [Montreal Mayor Denis] Coderre and [Quebec City Mayor Regis] Labeaume want this? Because it will be cheaper."

He also said any official who expects labour relations to be calm after Bill 3 becomes law is sorely mistaken.

Marc Ranger, the spokesperson for the coalition of union groups, spoke in front of Montreal City Hall on Wednesday morning.

With protesting city workers behind him, Ranger dismissed Mayor Coderre as "Mr. Selfie" and promised that union workers would launch a legal battle against Bill 3.

"We will fight on all fronts and we will win, legally. What they are doing is illegal and immoral," said Ranger.

"We could sit down and just cry and let that piece of legislation go through. No! So we need to do some pressure," said Ranger.

"When you have something that is going on that is unfair, well, we won't let that happen and say 'thank you.' We're going to continue this kind of action."

Among the job action taken on Wednesday:

Meantime, Premier Philippe Couillard said he is more determined than ever to reform pensions for everyone.

“Quebec's objective of putting our financial house in order not only for this generation but for the next and also for the people who will be in the streets,” he said, adding that the day of union action did very little to help the unions’ cause.

“Taxpayers this morning want to go to work and I think it's a counter-argument to try to block them from getting to work,” he said.

Members of the Liberal government said the population supported the changes they were implementing and will stand firm no matter what.

On Wednesday morning a brick was tossed through the Chateauguay riding offices of the Municipal Affairs Minister, Pierre Moreau.

He said that was unacceptable and would not deter the government.

Moreau added that unionized workers have to accept that the public will not make up shortfalls in their pension plans, even if those shortfalls were caused by municipalities not contributing enough to keep the plans solvent.

"The problem is that you have a $3.9 billion deficit over these pension plans and they want people to pay for that which is unfair.

"Why should they pay for a deficit that doesn't belong to them?" asked Moreau rhetorically.

Lise Theriault, the minister of Public Security, suggested unionized workers were only going to make people angry by blocking the Port.

"That's not the best way to curry public sympathy," she said.

Transport Minister Robert Poeti defended the changes being made to Bill 3 and and to public spending in general, saying "people knew in the April election that the Liberal Party of Quebec planned to clean up public finances."

Bill 3 will force unionized municipal union workers to contribute more to their pension plans, by paying more in the next few years to make up the approximate $4 billion in shortfalls, then setting long-term contribution rates of 50-50 between employees and municipalities.

Unions argue their contribution rates have been negotiated in previous contracts and it is unfair to arbitrarily change them.

The government says unions should accept the changes to make sure  their pensions are fully funded, while pointing out the majority of workers in Quebec don't have pension plans at all. 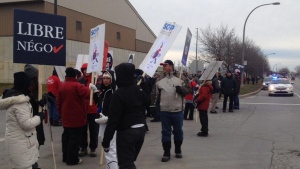