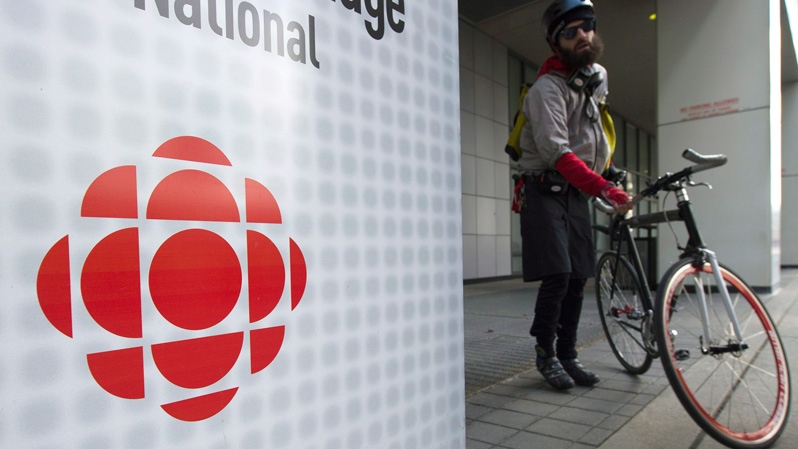 A bike courier parks his bicycle at the CBC building in Toronto on Wednesday, April 4, 2012. (Nathan Denette / THE CANADIAN PRESS)

MONTREAL - Hundreds of Montrealers snarled traffic on Tuesday afternoon as they sat on St. Denis St. in front of the National Film Board's CineRobotheque, protesting the government's plan to slash funding to the NFB and CBC.

With plans to shutter the CineRobotheque, a victim of the March 29 federal budget, the NFB has announced that it will fire 61 employees in a bid to close a $6.68 million shortfall.

In the 2012 budget, both the NFB and CBC were directed to make 10 per cent cuts to operations. With administrative staff bearing the brunt of the cuts, the NFB's film production budget will only be cut by 1 per cent.

On Tuesday, the CBC announced that it is scrapping CBC News Network's "Connect with Mark Kelley," CBC Radio's "Dispatches" and shuttering news bureaus in Africa and South America.

Marc-Philippe Laurin, president of the Canadian Media Guild's CBC branch, says the public broadcaster's news and TV program divisions will apparently bear the brunt of reductions planned over the next three years.

They also include the elimination of 88 news jobs and another 18 positions in the documentary unit.

"It's not a good day for CBC," Laurin said Tuesday, when management outlined plans at an internal meeting at CBC's Toronto headquarters.

He said prime time programming will be reduced by about 25 per cent, with the CBC commissioning six fewer prime-time series and launching fewer special events like "Canada's Smartest Person."

The reductions are part of 256 job losses throughout English Services expected to roll out over the next three years.

The belt-tightening follows last week's federal budget, which cut $115 million from the CBC's overall budget over the next three years.

Last week, the public broadcaster said it expected to lay off more than 650 people over that period, with the majority to be let go this year.

It said CBC fans could expect fewer new TV shows, more ads on radio and the delay of regional initiatives that were meant to boost local programming.

Government funding makes up about 64 per cent of CBC's budget and the corporation receives about $1.15 billion a year from taxpayers.

Laurin says he has "some empathy" for the hard decisions facing managers.