The rumbling, scraping, cacophonous chorus has begun in Montreal as the city starts pushing, piling and placing snow away from vehicles and pedestrians.

Montreal's snow loading and removal operation will begin at 7 a.m. Tuesday with priority given to hospitals, public transit systems and major arteries.

The city's clearing operation began Sunday night with workers spreading salt and sand on the road.

“This morning, We had 1,000 workers... 1,000 trucks on the road to push the snow aside and do extra salt, extra little rocks in order to ease your movements,” said City of Montreal spokesperson Philippe Sabourin.

Around 2,220 trucks will be out tomorrow to load and remove the snow from around 10,000 kilometres of roads, sidewalks and bicycle lanes.

The city will create just under 8,000 free parking spaces, mostly at night, and remove parking bans as soon as loading is complete.

It will keep an eye on illegal snow dumping on public roads and punish those responsible, it says.

The map of free parking spaces can be found here.

Sabourin said drivers should park 30 centimetres from the curb.

"Leave us some clearance on the sidewalks also and slow down your speed," he said.

In addition, the city asks that citizens give snow removal equipment a good deal of space and to make eye contact with the drivers so they know where you are, as the vehicles have large blind spots.

If you’re heading out today be very cautious when tackling some of the city’s steeper streets. I stood on the corner of Robert Bourassa and Belmont and shot this all within five minutes @CTVMontreal pic.twitter.com/B6HcW0TG05

The city is also inviting kids with a creative side and talent for sculpting snow to build something outside.

"If they want to get involved in our contest, they have to build a snowman," said Sabourin.

"Maybe this way we will transform Montreal into a giant museum of snowmen. That would be my wish." 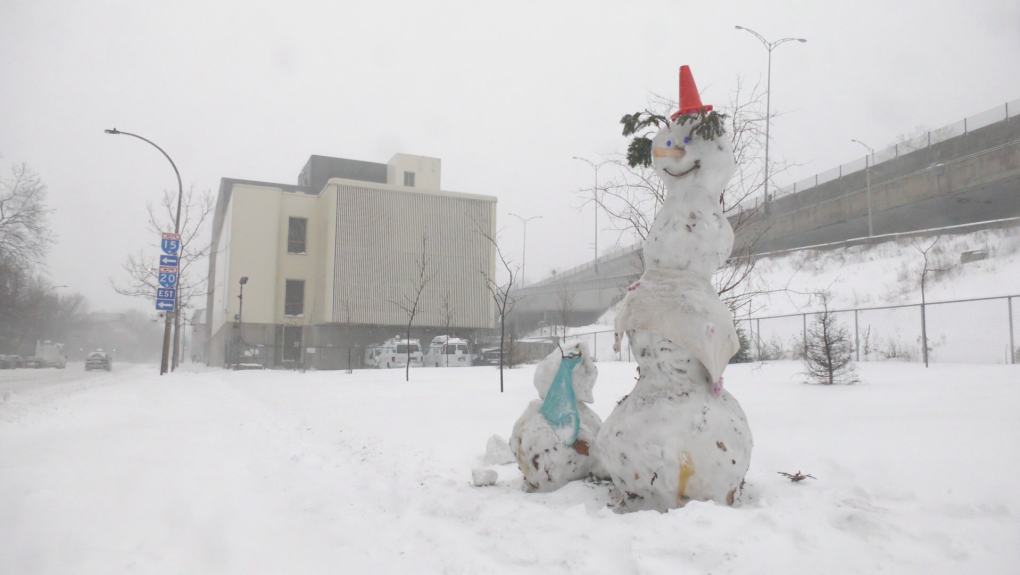 Montrealers are already out building snowpeople as the city got its first major dump of white stuff on Monday. (Kelly Greig/CTV News)

Montrealers are already out building snowpeople as the city got its first major dump of white stuff on Monday. (Kelly Greig/CTV News)