Montreal police are defending their decision to launch tear gas on thousands of hockey fans outside the Bell Centre minutes after the Habs' 3-2 overtime win over the Tampa Bay Lightning on Monday.

It was the second time in less than two weeks that Montreal police officers used tear gas against fans outside the arena without first ordering the crowd to disperse.

"At the end of yesterday night, bottles were thrown and fireworks were set off in the area around the Bell Centre," police spokeswoman Anik de Repentigny wrote in an email Tuesday, adding that police took measures to restore order a few minutes after the end of Game 4 of the Stanley Cup final.

"The use of chemical irritants was judged necessary to disperse some recalcitrant groups."

But Vincent Wong, a human rights lawyer and PhD student at Osgoode Hall Law School in Toronto, said one of the biggest problems with the use of tear gas by police is that it's indiscriminate.

"Tear gas cannot distinguish between the young and the elderly, the healthy and sick, the abled and disabled, and, of course, the peaceful and violent," he said in an interview Tuesday.

Children were seen suffering from the effects of the gas, while spectators leaving the Bell Centre were pepper-sprayed by police on at least one occasion.

Wong, who coauthored a 2020 report on the use of tear gas that was published by the international human rights program at the University of Toronto faculty of law, said police have a responsibility under international law to distinguish between dangerous elements of a crowd and those who are not a threat.

"If you're just shooting tear gas canisters into the middle of a crowd, this directly violates and is at odds with this positive duty under international law," he said.

Montreal police say their presence at gatherings allows people to celebrate while preventing disturbances that could put public safety at risk.

"With this in mind, the SPVM recommends that the public move as far away as possible if there is a disturbance in a crowd. This allows police officers to focus on the disruptive elements," de Repentigny wrote. 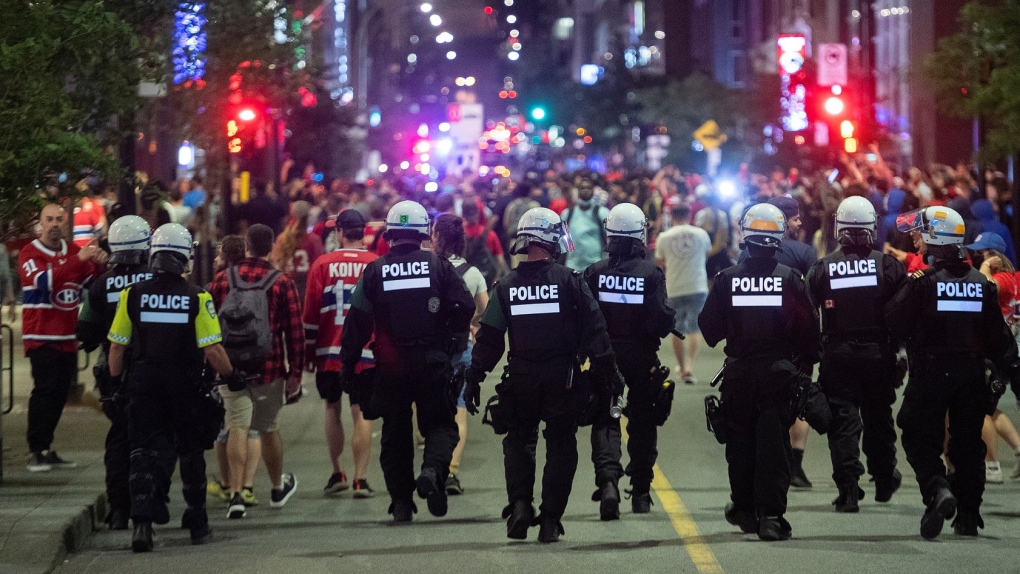 Montreal Canadiens fans are dispersed by police following the team's overtime win in game 4 of the NHL Stanley Cup final against the Tampa Bay Lightning, in Montreal, Monday, July 5, 2021. THE CANADIAN PRESS/Graham Hughes

Montreal Canadiens fans are dispersed by police following the team's overtime win in game 4 of the NHL Stanley Cup final against the Tampa Bay Lightning, in Montreal, Monday, July 5, 2021. THE CANADIAN PRESS/Graham Hughes

Montreal police have faced criticism for their use of tear gas before.

Last December, Montreal city councillor Marvin Rotrand introduced a motion calling for tear gas to be withdrawn from the police arsenal. An amended motion passed, calling for the city's public security committee to examine the possibility of removing tear gas from the police service's arsenal and to make recommendations about its use by officers.

"Tear gas is banned in warfare by conventions that date back to the 1920s but there's no control of its use over civilians," Rotrand said in an interview Tuesday, adding that Montreal police tend to make more use of tear gas than police in other Canadian cities.

"Tear gas is the lazy man's way to control crowds; the police have all sorts of other options," he said. "At the very least, tear gas must only be used in exceptional circumstances -- crowd control in front of a hockey arena is not one of those."

Wong said the onus should be on police to de-escalate situations. The use of tear gas and shows of force by police can antagonize crowds, he said. "Often it creates the absolute reverse of what they're looking for."

Police said they arrested four people and issued 36 tickets following the Montreal Canadiens' win in Game 4 of the Stanley Cup final. A police spokesman said the arrests were for alleged assaults or armed assaults against police officers.

This report by The Canadian Press was first published July 6, 2021.

This story was produced with the financial assistance of the Facebook and Canadian Press News Fellowship.