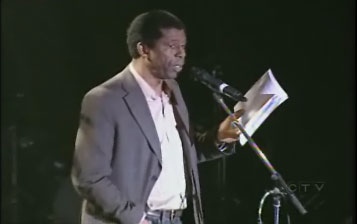 L'Academie francaise elected Laferriere on Thursday to the highest honour granted in the French language, the first such honour granted to a Quebecer and to anyone of Haitian origin.

For the rest of his life he will be one of 40 members of L'Academie, responsible for being the official authority on the development of the French language in France and around the world.

"I have to contain my joy because otherwise I'd overflow," he said in a telephone interview with The Canadian Press from Haiti, where he is attending a book fair.

"I guess if I were athletic, I'd like to be in a hall of fame," Laferriere said with a laugh.

"It's one of the oldest institutions that there is that brings together writers. To sit in the same chair, in a metaphorical way, as Montesquieu, Dumas, Voltaire, La Fontaine, Racine -- it's not bad."

The Academy was established in 1635 by Cardinal Richelieu and tasked with maintaining the purity of the French language. It's official dictionary and its rulings are, however, not binding on anyone or any institution.

Earlier this year Michael Edwards became the first Englishman elected to the post.

Born in Haiti in 1953, Laferriere has written two dozen novels and significant essays, including 'L'enigme du retour' which won the Medici prize in 2009. His first novel, How to make love to a negro without getting tired, was turned into a screenplay which earned a Genie nomination.

Laferriere also has an extensive career as a journalist and TV host.