Travellers flying out of the Montreal airport might be in for a shock this summer as airlines will likely need to cancel some flights — or destinations altogether.

"We're getting very close to that. We're having discussions, and it's likely the frequencies — the number of flights we'll have on a given destination — or destinations themselves," said Philippe Rainville, president and CEO of the Montreal-Trudeau Airport, on Wednesday.

The disruptions are due to a staffing shortage, meaning there aren't enough workers to load and unload planes. Rainville said this kind of service reduction has not happened in recent memory.

"It's very sensitive, obviously. We have people that have booked vacations, so the airlines will have to be extremely careful in how they manage that," he said.

At least one Canadian airline is already heeding the call to cut back. Air Canada said in a statement that it will start slashing flight schedules throughout July and August, even though the airline said it tried to anticipate the surge by "careful planning" and "the largest and fastest scale of hiring in our history."

In a statement Wednesday, Air Canada CEO Michael Rousseau said the national flag carrier is struggling to keep up with the "unprecedented and unforeseen strains on all aspects of the global aviation system."

Rousseau said it "will result in additional flight cancellations."

"But doing this in advance allows affected customers to take time to make other arrangements in an orderly manner, rather than have their travel disrupted shortly before or during their journey, with few alternatives available."

It couldn't have come at a worse time for those hoping to travel again after two years of a pandemic. Airports across the country, including Montreal, are facing long lineups, lost luggage, and little patience from travellers.

Recent data shows 51 per cent of all flights in and out of Canada's major airports were cancelled or delayed between June 22 and 27. The data from DataWazo, a data strategy agency based in Fredericton, N.B., stated the worst-hit airport was Toronto, with 11 per cent of flights during that same period being cancelled and 52 per cent of flights being delayed. 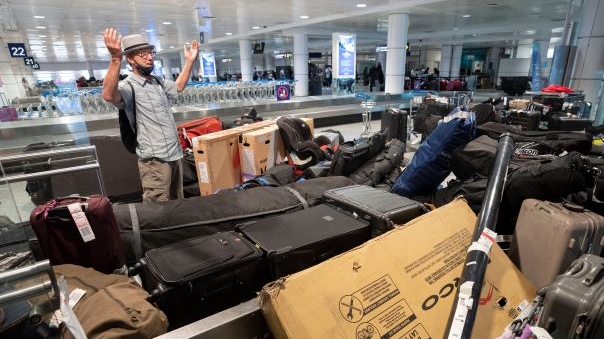 Jacques Bernier looks for his bicycle among a pile of unclaimed baggage at Pierre Elliott Trudeau airport, in Montreal, Wednesday, June 29, 2022. THE CANADIAN PRESS/Ryan Remiorz

'I HAVE NO IDEA WHAT HAPPENED TO THE BAGS'

CTV saw firsthand the frustration some are dealing with in Montreal, the country's fourth-busiest airport.

"I spent almost two hours in the baggage lineup downstairs so we could go to a hotel, only to find out the bags hadn't even been put on the plane," said one traveller on Wednesday.

"I have no idea what happened to the bags," said another amid the chaos in the airport.

So to say Montreal Airport has a baggage issue is an understatement pic.twitter.com/QGGOBJwCtr

Rainville said some flights filled with passengers are coming in with no luggage, only for suitcases and baggage to arrive the next day. Then, it all has to be re-dispatched.

While the waits are long at the airport, travellers say information from staff is also in short supply.

"Nobody was saying anything, nobody said, 'Hey, come stand in this line. We're going to get you through.' It was like nobody worked here," said one passenger.

The federal government said it has hired more border agents to try to ease the bottleneck in the most affected Canadian airports.

"We're seeing the surge in demand [for travel] outpacing the ability of airlines and airports to enhance the resources they need to accommodate that surge," said federal Transport Minister Omar Alghabra.

LISTEN ON CJAD 800 RADIO: What should you expect at the airport?

"They have sold way more tickets to way more passengers than the system was able to support and handle at this point and this was predictable," he said.

The shortage of workers appears to be across the board. Documents presented to Parliament and reviewed by CTV National News show that the number of employees working at airports for the Canada Border Services Agency (CBSA) and the Canadian Air Transport Security Authority (CATSA) has not yet caught up with pre-pandemic levels.

Long lineups at passport offices in Montreal in recent weeks have only caused further headaches heading into the summer travel season.