Global health experts in Montreal are urging Canadians to make use of the upcoming lull between waves to pressure the federal government to help vaccinate the world -- for the most "selfish" of reasons, they say.

"Reducing viral transmission everywhere will reduce the risk and likelihood of variants... and should be our goal if we truly want to end this crisis," he said.

That’s the biological rationale for ensuring that all countries have access to vaccines, but there are at least two more rationales: humanitarian and economic.

And there are many reasons to explain why, Pai believes, many wealthy nations like Canada have failed low- and middle-income countries, describing their decisions as "nationalist and isolationist."

"We banned travel from a bunch of African nations. Instead of supporting them and sharing our vaccines--we banned them," said Pai.

"We’re in the third year of the pandemic. It's this kind of myopic thinking that has led the world into this disastrous situation."

THE WORLD WAS WARNED

When the catastrophic Delta-driven wave swept across India in the spring of 2021, Pai said he felt helpless, and as though he were living in two different worlds.

While he and his family in Montreal had access to vaccines, testing, masks and medicine, close family members and friends in his country of origin were gasping for air as the virus spread across the country, unchecked.

"Our own family members couldn’t get hospital beds -- we had to provide them oxygen cylinders at home. We were managing people on WhatsApp as doctors,” he said.

India has claimed in the past that about 500,000 people died during that period, but Pai said it was likely 10 times higher.

On Thursday, a report on global excess deaths issued by the World Health Organization (WHO) aligned with his assessment, suggesting there were closer to 4.7 million deaths in India associated with COVID-19.

“This is devastating, and this is carnage,” Pai said, adding he was struck by the dissonance between the privileges experienced by his family in Canada, and the lack of privileges in other parts of the world.

While the majority of India's population is vaccinated now, global inequity remains stark, despite the fact that an astonishing 11.6 billion doses have been administered since they were approved for use, according to Oxford University Data.

About 65 per cent of the global population has received at least one dose.

However, about 80 per cent of those first doses went to people in the highest-income countries, while only 15.8 percent of people in low-income countries have received at least a first shot. Of these, the vast majority are in Africa.

“I feel quite despondent, honestly, to be in this third year and to still have almost three billion people around the world who haven’t even had the first dose, while we’re talking about the fourth dose here,” Pai said.

“We cannot stand by and not do something. That’s the humanitarian reason to save lives -- that should be enough, right?”

But, Pai said, in fact it hasn't been enough, accusing countries like Canada of hoarding vaccines, thereby shirking their moral obligation.

If the calamity in India didn’t awaken their sense of solidarity, neither did the science explaining the consequences of unbridled transmission.

“Each person who is COVID-infected generates billions of virus particles," he said.

"And then you do the math: millions multiplied by billions. By sheer chance, mutations will happen, copying errors in the DNA will happen, and we’ve seen how variant after variant has emerged,” Pai explained.

He and other colleagues spelled it out in academic articles, interviews and tweets, trying to get across that until all countries have vaccine access, we will be stuck in a perpetual pandemic. 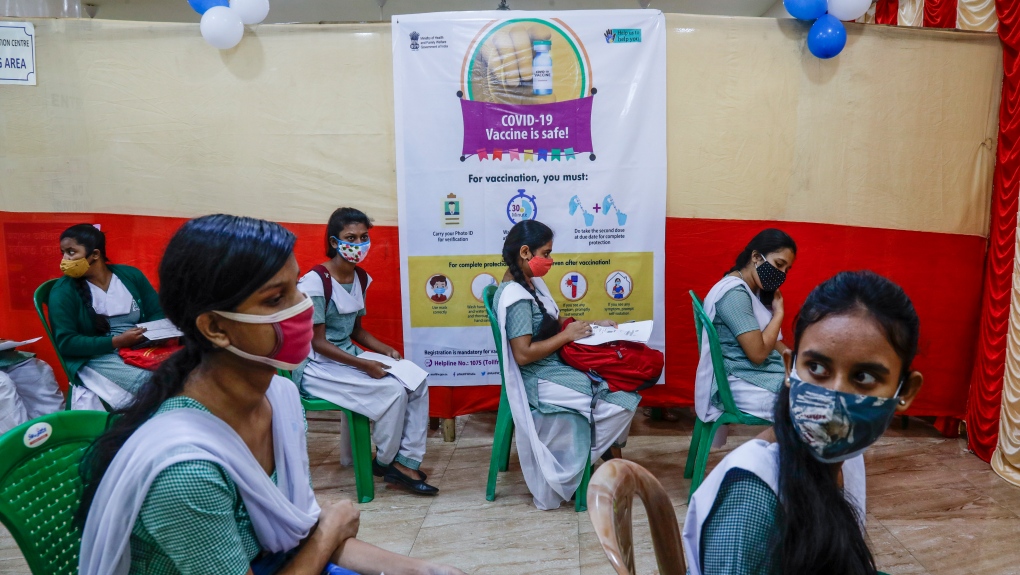 School girls wait to receive vaccination for COVID-19 at a school in Kolkata, India on Jan. 3, 2022. (AP Photo/Bikas Das)

‘NO ONE BELIEVED US’

Dr. Joanne Liu, who works on pandemic preparedness and response at McGill University and for the WHO, says she's equally disturbed by the government’s lack of preparation and action.

“After the regional epidemic of Ebola from 2014 to 2016 in West Africa, I’ve been on different commissions and different evaluation assessment groups, and we said that the world was not ready – but no one believed us until it happened,” Liu said.

“We need to keep the pressure on our authorities to really deliver on their words. They said they would give the equivalent of 200 million vaccines, and they said as well they would deliver, in kind, 15 million of it. They haven’t done that yet."

And it’s not enough for wealthy countries to just load crates of vaccines onto planes, the experts said.

Low- and middle-income countries also need help addressing vaccine hesitancy, especially among populations who may not even have the means to afford food, let alone to travel to a vaccine centre.

There also needs to be training for vaccinators, ample supplies of materials like syringes, and the proper equipment and appliances so that vaccines can be stored safely.

“We have to understand that here, in a G7 country, when we did our vaccination campaign we even asked the army to give us a hand at the beginning of this year... so I think we need to give a break to countries that are struggling,” said Liu.

Advocates say COVAX -- the global vaccine sharing alliance that was meant to address the vaccine access issue -- is not working as it should.

“COVAX was undermined by rich countries, including Canada, because they directly purchased and cleaned out the shelves,” Pai said.

Ottawa recently announced it's increasing its contribution to COVAX by $220 million.

But Pai said the money doesn't change Canada's poor record on vaccine equity, and he points out Canada is sitting on extra doses that will soon expire.

As of April 21, the country had a total of 14 million doses in its central inventory, according to information sent to CTV News by the Public Health Agency of Canada (PHAC).

The other lots have expiry dates ranging from May 31 to November 30. There is no firm commitment yet to donate them to countries in need.

“If there are doses that exceed or surpass Canada’s needs with sufficient shelf life, Canada makes every effort to make them available to other countries through COVAX or bilateral donation,” Maddison wrote.

Canada is also non-committal about an initiative called the TRIPS waiver -- even though more than 100 other World Trade Organization members have signed on.

The proposal calls for the temporary suspension of intellectual property rights so that any country could manufacture a COVID-19 vaccine at home.

McGill University law and faculty of medicine professor Richard Gold said there’s no ambiguity about why a pharmaceutical company wouldn’t want to share its trade secrets.

“If I’m one of the companies that holds one of the patents I will make more money by controlling it,” he said.

And make money they did -- tens of billions of dollars so far, after also benefiting from government investments and being guaranteed a market for their product.

“They've profited not because it’s patented. They’ve profited because there’s a global pandemic and governments have paid for it,” said Gold, who is also the director of McGill’s Centre for Intellectual Property Policy.

Moderna has said it's not going to enforce its patents.

“But that’s like saying 'You can make my grandmother’s secret recipe for whatever it is,'" Gold said.

“And so what we need is not only not enforcing intellectual property rights but what we call technology transfer, helping other entities access it,” he said. 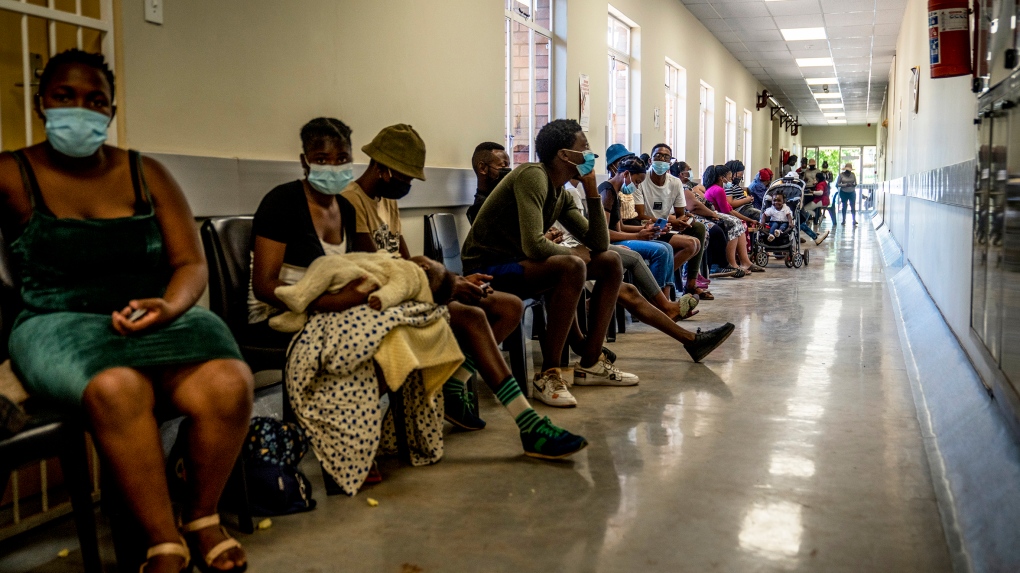 People queue to be vaccinated against COVID-19 at the Lenasia South Hospital, near Johannesburg. Wednesday, Dec. 1, 1021. (AP Photo/ Shiraaz Mohamed)

Despite all the barriers, a small WHO-sponsored company in South Africa called Afrigen managed to develop a version of an mRNA vaccine from scratch.

They used publicly available information and data -- and possibly, Gold said, some that were leaked.

“We’re pretty sure, we don’t know, that some scientists just were brokenhearted and felt compelled to help,” he said.

But it's still an uphill battle. Afrigen is running into issues around patents and still needs to redo all the clinical trials required to prove the vaccine is safe, which is a time-consuming and expensive proposition.

The pharmaceutical giants are now trying to set up some manufacturing facilities in sub-Saharan Africa, but Gold says it's too little, too late.

What the drug-discovery model needs, he suggests, is an open-science system, now and for future emergencies.

"And instead of actually succeeding in the goal, which is how do we solve this global pandemic costing us billions of dollars and people’s lives and people’s health, we’re allowing them to do the opposite."

Liu is asking the same types of questions.

“How do we incentivize discovery to make sure that it's accessible?" she said.

"And if you don’t make those deals prior to discovery, it’s going to be very hard to go back to the company and say 'you need to share.'”

She is not one to think it’s ever too late to act, she said, but she added that at this stage of the pandemic there’s no room for more hesitation on the part of the government.

“I think that for the next generation of vaccines, we should really make an effort to get it everywhere in a timely fashion,” Liu said.

Likewise, even though people are caught up with the lifting of some mask mandates and sunnier skies ahead, Pai is calling on everyone to email the prime minister and their members of parliament now, to demand global solidarity.

“They need to hear [that] average Canadians are truly worried that if this inequity continues, we will be battling another horrible Sigma or some other bad variant in the coming months,” he said.

He compared the ongoing pandemic crisis to the climate crisis.

“There’s no ending the climate crisis just for B.C. or Quebec or for Canada," he said.