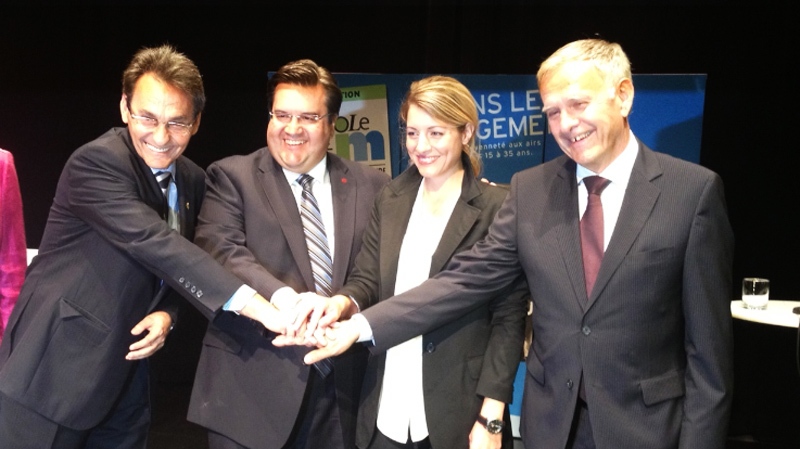 Four of Montreal's top mayoral candidates slugged it out in their first debate of the campaign Friday night at the Institute for the Nouveau Monde.

Political veterans Richard Bergeron and Denis Coderre were joined by political neophytes Marcel Coté and Melanie Joly in a debate which might prove valuable to Montrealers still dizzied by a municipal landscape that has seen three men sit as mayor over the last year.

Marcel Cote - an economist who is supported by Louise Harel and Marvin Rotrand, among others - introduced himself by explaining that he was persuaded to enter municipal politics after being scandalized by a series of embarrassing infrastructure disasters that exposed the city as being poorly administered.

Former Liberal MP Denis Coderre spoke next and said that he’d undertake to channel the passions of the city's youth, which were expressed during the student disruptions of 2012. He also said the he would value the contributions of those with experience as well, making an indirect reference to the preponderance of former Union Montreal representatives running for his party.

Projet Montreal veteran Richard Bergeron kicked off his remarks by blasting the city’s administration, which he said has been a disaster of “collusion, corruption and incompetence,” for the last 25 years. “We alone have the audacity to bring Montreal into the 21 st century,” said Bergeron. “We have absolute integrity, as evidence, you’ll note that there are no former Union Montreal members in Projet Montreal.”

The quip got a laugh from the crowd but Bergeron would try to play the same card later with less success when Coderre blasted him back by claiming that Bergeron had attempted to recruit many Union Montreal representatives.

Bergeron was later also given a rough ride from Melanie Joly, who described many of his plans as extravagant and unrealistic.

Joly, in her opening remarks, said that there are two Montreals, one of the citizens and another of the politicians.

“This is a city we should be proud of, but we’re being held back by politicians who don’t understand that what did not work yesterday won’t work tomorrow,” she said.

The four then engaged in the most interesting segment of the evening, going head-to-head in duos. One interesting exchange was over the issue of homelessness. Cote said that some homeless had been deinstitutionalized too quickly, while Coderre said that he empathizes with the homeless and has even slept among them. Bergeron said that he is the only candidate who lives in the downtown area where many homeless live and speaks to them frequently. They all agreed that the homeless need more support and help.

Cote said that about 40 percent of Montreal's population consists of either immigrants or visible minorities a fact that, "is not reflected here tonight." He then got a jab in at rival Bergeron by calling the Projet Montreal leader "lofty and dogmatic."

Bergeron replied that his party was far from dogmatic and in fact had the most open-minded members of any party, a comment that initially inspired derisive groans from the crowd, which were then overcome by earnest applause.

A spirited Joly, who wasn't shy to talk over others during her exchanges, attempted to score points in an exchange with Denis Coderre, in which she said that the local political experience over the last couple of years is, “the worst cataclysm of the last 50 years.”

Candidates later answered questions from the crowd, the first of which forced them to explain their views on the delicate and ever-divisive language issue, reflected in this unofficial translation of their replies.

Richard Bergeron responded first: "Montreal is a French city, according to its charter but meanwhile the reality is that Montreal is the most bilingual city in the world. I’m proud that my kids are perfectly bilingual. They say that they speak better English than me. My candidates are also bilingual. The French personality has to be maintained and reinforced. That’s what makes me want to slow the exodus to the suburbs, as these are mostly francophones leaving. That pains me because it’s my community that’s leaving. Part of my motivation in municipal politics is to keep young families in Montreal. That also means keeping French-speaking families in Montreal. I don’t see that much needs to change, only one borough is bilingual, Pierrefonds-Roxboro. I’d like it to stay that way."

Denis Coderre addressed the language issue with this response. "Montreal is a French city according to its charter, that’s what makes it unique in the world. We’re like a European city, but we have to offer services, we start in French, then proceed in other languages if required. Let’s also remember that the Montreal flag has four origins. That’s the duality of the metropolis, it helps make it one of the most beautiful cities in the world and we can use that to attract jobs. A lack of integration is the problem, it stems from the lack of work. Unemployment is the problem. When I was federal minister of immigration we signed an agreement with Quebec. Quebec represents 25 percent of the Canadian population but only gets 15 percent of immigrants. Cities get stuck with problems related to integrating immigrants, the Quebec government has to give more money to Montreal. We need to integrate immigrants, not just give work but to teach them French."

Marcel Cote's take on language also veered into the issue of immigration. "I agree with the words of Mr. Bergeron so I won’t repeat them but I’ll mention that the main problem of immigrants is they sometimes have trouble finding work. The problem is more marked in Montreal than other big cities that get immigrants. We don’t know why but it’s a significant problem. In Toronto, we can see it’s different. Many white faces, French Canadians are part of the problem. We need to be part of the solution; we need to do more to integrate immigrants into our collectivity. We need to accept them better. The solutions aren’t easy there have been many discussions but their problems starts with employment."

Melanie Joly was much more brief in addressing the language issue. "Somebody who wants service in English can get it. Montreal is a city with more harmony than division. All summer I did events and very few talked to me about language. They’re more concerned about corruption."

The two hour debate finished at 10 p.m. with statements from the four candidates that reflected little of the passion that characterized some of the earlier exchanges.