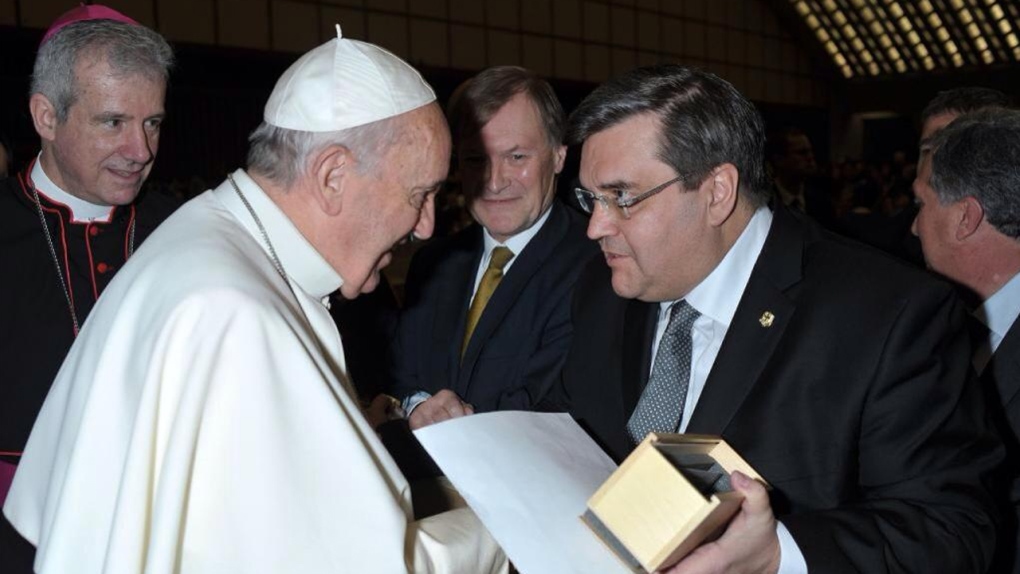 Montreal mayor Denis Coderre met with Pope Francis at the Vatican Wednesday to personally invite him to attend the city's 375th anniversary celebrations in 2017.

Mayor Denis Coderre met with Pope Francis at the Vatican Wednesday to personally invite him to the city's 375th anniversary celebrations in 2017.

Coderre said they discussed Montreal's Catholic heritage and how it still resonates in the city's institutions and architecture as illustrated by such symbols as the famous cross on Mount Royal.

The Vatican has not yet indicated if Pope Francis will accept Coderre's invitation.

Montreal's mayor also suggested the pope include Quebec City on his itinerary if he accepts.

The last time a pontiff visited the province was September 1984 when John Paul II drew massive crowds in Montreal, Quebec City and Trois-Rivieres.

One of the highlights of that visit was a huge gathering of young people at Olympic Stadium.

The mayor said he gave the letter to the pope directly during a brief meeting following the weekly papal audience.

Coderre told The Canadian Press he hopes that discussions with other key members in the pope's entourage will lay the groundwork for a visit.

"We were told that going forward now for 2017 was the right strategy instead of waiting until the last minute," Coderre said in a phone interview from Rome. "The pope has already planned his trips for 2016."

Coderre said he spoke to someone in charge of international relations at the Vatican and was scheduled to meet with Secretary of State Pietro Parolin.

"We had the great opportunity to meet not only the pope but to meet the other people so we can cover all the angles," Coderre said. "It was a good day for Montreal."

In Quebec City, news of the invitation was met positively by the Liberal government.

International Relations Minister Christine St-Pierre says Coderre didn't speak to her about the invitation before embarking on his trip to Europe this week, but she knew he was strongly considering doing so.

St-Pierre said it would be a pleasure to have Pope Francis visit Quebec.