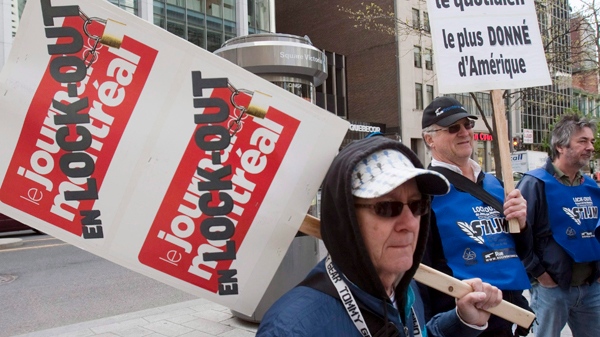 Locked-out employees of Le Journal de Montreal protest outside of the Quebecor annual meeting on May 12, 2010 in Montreal. THE CANADIAN PRESS/Ryan Remiorz

MONTREAL - It's been two years since workers were locked out of Le Journal de Montreal, and journalists and office staff held a concert Monday night to raise funds and mark the anniversary.

"It's been a hard two years and an amazing experience on a lot of levels," union member Pascal Filotto told CTV Montreal's Aphrodite Salas.

"To be all together after two years is pretty special I think.... I think we're closer to a settlement than we've been. There's probably less in front of us than we've already covered."

Negotiations between Quebecor and the union resumed on Wednesday after stopping in October when employees rejected an offer by a vote of 89 per cent.

Quebecor president and CEO Pierre-Karl Peladeau confirmed Sunday they were back at the bargaining table, "for the good of everyone."

Le Journal hasn't missed a day of publication since the lockout began on Jan. 24, 2009, relying on material supplied by management and a news agency created by Quebecor.

- with files from The Canadian Press