'Instead of getting help, he got three bullets': Family of man killed in Repentigny demand answers

'Instead of getting help, he got three bullets': Family of man killed in Repentigny demand answers

The family of 37-year-old Jean-René “Junior” Olivier is demanding answers after he was shot and killed by Repentigny police officers on Sunday.

Marie-Mireille Bence, Olivier’s mother, call to police that morning after she says he appeared to be in a state of psychosis while holding a knife.

She says Oliver told her he was seeing people around him that wanted to harm him.

Bence’s brother reportedly asked him to put the knife down, but he refused. She says she had no choice but to call the police.

“I called for help and then found my son on the ground,” said Bence Monday. “I find this absurd. There were other ways to do this, other means of disarming him, but they didn’t do that.” 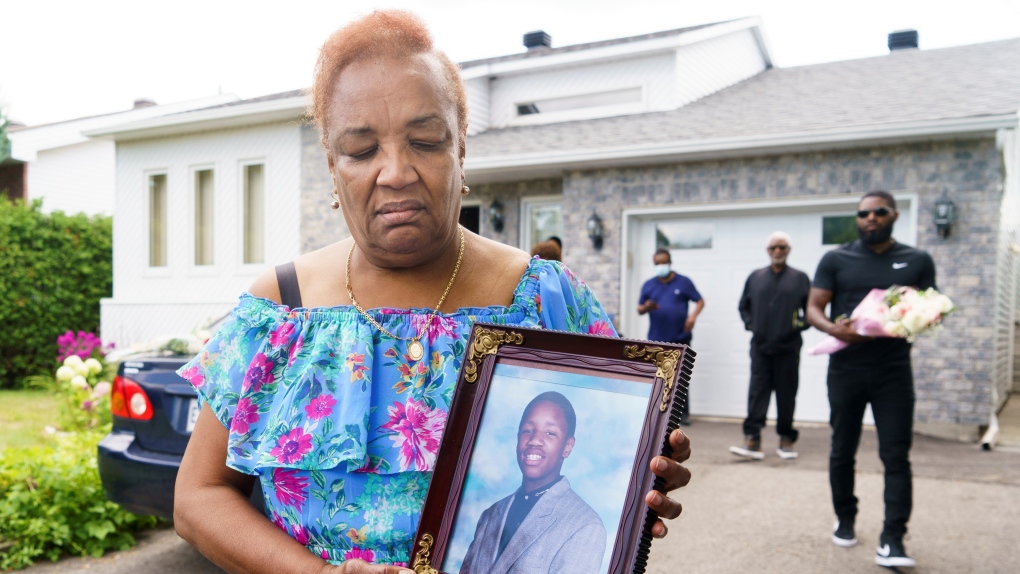 Marie-Mireille Bence, mother of Jean-Rene Jr. Olivier, who was shot dead by police, holds a picture of her son in front of the family home in Repentigny, Que. on Monday, August 2, 2021. THE CANADIAN PRESS/Paul Chiasson

Marie-Mireille Bence, mother of Jean-Rene Jr. Olivier, who was shot dead by police, holds a picture of her son in front of the family home in Repentigny, Que. on Monday, Aug\. 2, 2021. THE CANADIAN PRESS/Paul Chiasson

According to a report from Quebec's police watchdog (BEI), a 911 call was placed at 7:33 a.m. Sunday about "a confused and disoriented individual armed with a knife."

When paramedics and officers from Repentigny police arrived at the scene, they located Olivier, who was outside with another individual.

"The police tried to write the man a ticket, but he fled on foot," the BEI notes. "The subject allegedly had a knife in his possession and was threatening the officers."

The BEI states the officers tried "in vain" to reason with the man, even using pepper spray "without success."

"The police officers fired several shots at the man and hit him fatally," the report concludes.

Following the incident, the BEI was called to investigate "whether this information is accurate." 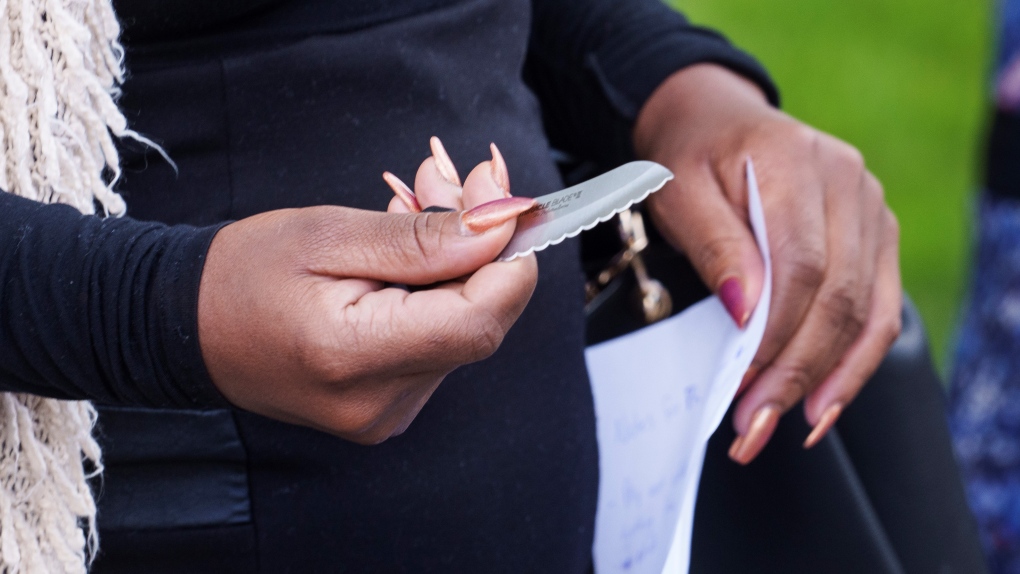 Dolmine Laguerre, a cousin of Jean-Rene Jr. Olivier, shows a knife similar to the one that was holding the victim before being shot dead by a police officer during a news conference in Repentigny, Que. on Monday, August 2, 2021. THE CANADIAN PRESS/Paul Chiasson

Dolmine Laguerre, a cousin of Jean-Rene Jr. Olivier, shows a knife similar to the one that was holding the victim before being shot dead by a police officer during a news conference in Repentigny, Que. on Monday, Aug. 2, 2021. THE CANADIAN PRESS/Paul Chiasson

“Instead of getting help, he got three bullets,” said Olivier’s cousin, Domine Lageurre. “Black people don’t have justice nowadays.”

Bence says she needs answers from the police chief and the mayor to "tell us what happened."

A STRING OF COMPLAINTS

The incident comes after a string of racial profiling complaints against Repentigny police.

In July, the Quebec Human Rights Commission ruled that the City of Repentigny and two local police officers should pay $38,000 in damages to former resident Leslie Blot for racial profiling.

In 2017, Blot was arrested in front of his house during a party. At the time, he claimed two police officers pulled up and questioned him because he was sitting in the passenger seat of his friend's car blowing up an inflatable children's toy.

The officers insist they questioned him because the car was not from Repentigny. It was registered in Laval, 30 minutes away.

Blot was arrested, handcuffed and given four tickets totalling over $700. One of the police officers erased Blot's recording of the intervention.

It was the fourth time the commission ruled against the city for racial profiling in a year.

“We still have about a dozen other complaints before the Human Rights Commission and we think those will complaints will be upheld,” said Fo Niemi, executive director at the Center for Research-Action on Race Relations (CRARR). “[Olivier's] family has not received any call from the police chief of the mayor, [not even] a word of condolence or a word of regret.”

The BEI is asking any potential witnesses of the incident involving Olivier to contact them via their website.

Canadian flags hang alongside French and British on the streets of Dieppe, France, each August as the city marks the anniversary of an important and disastrous day during the Second World War.