Free Wi-Fi is now available in Old Montreal and will eventually be accessible in the downtown core.

In the first phase of the 'Smart Montreal' concept, wi-fi transmitters will be deployed around Old Montreal and the Palais des Congres.

By 2017 free Wi-Fi should be available throughout the downtown core as well.

"It's a competitive issue," said city councillor Harout Chitilian. "When you go to another city, one of the first things you do is look for free wi-fi, even if you have a roaming plan."

"If you're a business traveller you want to have those basic services, just like opening the tap and having water inside there.

"I was talking with people from Sweden and in Stockholm they don't even ask the question. They have free Wi-Fi in public spaces, in parks, in business areas."

“They'll set up their own hotspots adjacent to the legitimate ones hoping you will sign in to theirs instead of the legitimate secure one,” he explained.

And if you make that mistake, hackers can get your personal information. Even if you don't use online banking, it could still be dangerous.

“If a hacker gains access to your email, those are essentially the keys to the kingdom because we put everything in our email, all of user names, all of our passwords,” he said.

The province of Quebec is contributing $2.4 million for the plan, while the city of Montreal is chipping in $450,000.

Mayor Denis Coderre said MtlWiFi will not compete with paid services, such as that offered by the Palais des Congres, since Montreal's service will only be accessible outdoors. 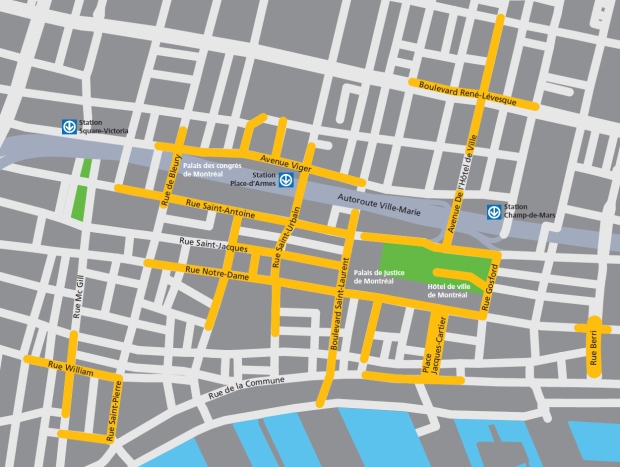 A map of the streets currently covered by free Wi-Fi in Old Montreal.