For the first time, a ghost bike honouring a killed Montreal cyclist was removed

MONTREAL -- For the first time in Montreal, a ghost bike was removed.

A white bike was installed on Saint-Denis St. under the des Carrieres overpass in memory of Mathilde Blais who was struck and killed by a crane truck in 2014 while she was riding to work.

Blais' mother Genevieve Laborde was surrounded by supporters and dignatories Sunday as the bike was removed.

"I am moved to know that my daughter's death will not be in vain and that it will serve to make future generations understand that citizen action can move things forward in a constructive way," said Laborde.

Ghostbikes Montreal (Velos Fantome Montreal) placed the bike "to bring attention to how dangerous overpasses are to the most vulnerable users in the city."

The organization said on its event page that the construction of new infrastructure under the overpass and along Saint-Denis St. would have saved Blais' life.

The bike will now be housed at the Musee de la Civilisation in Quebec City.

Ghostbikes Montreal is an organization that installs white bikes in and around the city in places where cyclists were killed in a road collision in honour of the victims and as a reminder to motorists to be aware of cyclists and to municipal leaders of deficient infrastructure.

The improved infrastructure on Saint-Denis St. is one example, Ghostbike says, of how roads can be made safer for cyclists and pedestrians.

"Despite the promises, it has been a long time coming. Yet infrastructure is the key to keeping the most vulnerable safe," said Ghostbike spokesperson Shanti Larochelle.

The organization said the other 10 installed ghost bikes in and around Montreal will remain in place and that more will be installed in the near future due to recent cycling tragedies. 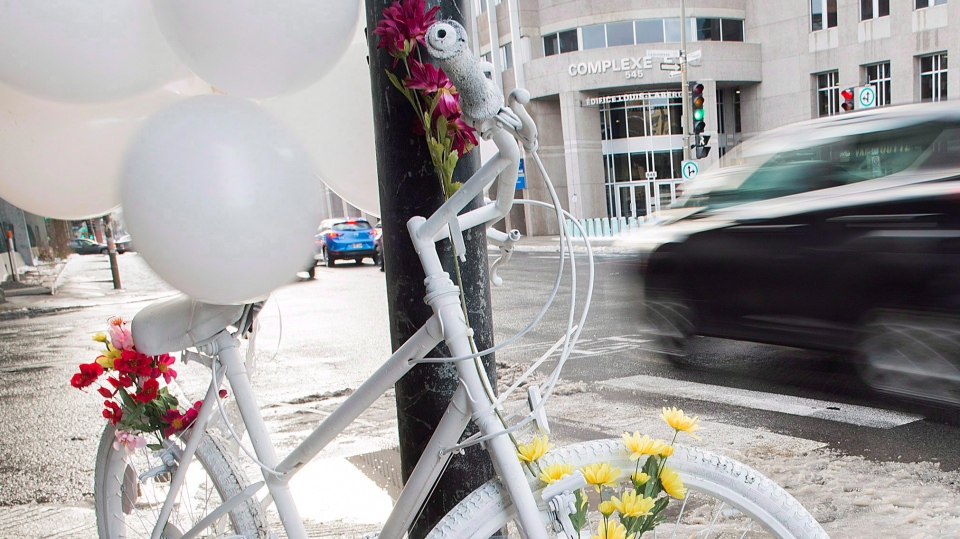 A white ghost bike in honour of Clement Bazin is shown in Montreal, Saturday, November 17, 2018. THE CANADIAN PRESS/Graham Hughes

The organization will leave a plaque in Blais' honour where the white bike once was installed.

"The bike will be taken down, but neither Mathilde’s memory, nor the memory of all other victims of road violence, will ever be forgotten," said organizers on the event's Facebook page.