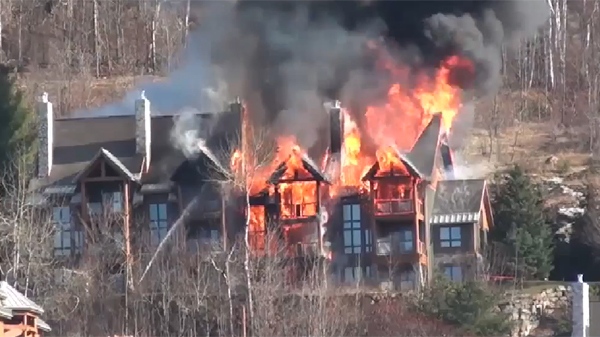 CTV Viewer Jeff Valin submitted this photo of a condo complex burning to the ground in Mt. Tremblant (Nov. 21, 2011)

A luxury condominium complex in Mont Tremblant has burned to the ground.

The fire broke out around 11 a.m. Monday at the Equinoxe 160, destroying three units, while a fourth was damaged but is still standing.

Firefighters were not able to do much except try to contain the blaze.

Jeff Valin saw the fire broke out, and shot the video embedded below.

Valin says his video shows that the single firehose being used to put out the flames did not have enough water pressure to be effective.

However Mont Tremblant fire chief Luc Champagne said what is seen in the video is normal -- that firehoses need about ten minutes of usage to become fully pressurized.

30 firefighters were called to the four-alarm fire.

Champagne said because the fire department is fully staffed, some firefighters had to leave their other jobs before arriving at the scene of the fire.

The cause of the fire is not known.