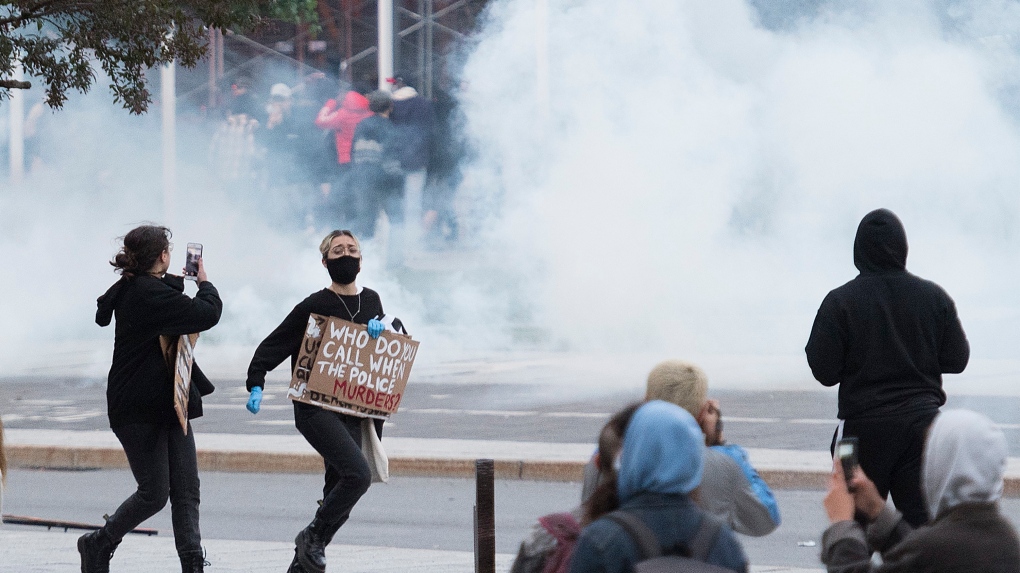 MONTREAL -- Montreal remains both the epicentre of COVID-19 in Canada and also the only known major city in the country to have used tear gas to disperse Black Lives Matter protestors at demonstrations held in recent weeks.

While the rate of COVID-19-related deaths is declining, experts worry that the recent uses of tear gas could increase the spread of the virus in Montreal.

Tear gas is made up of multiple substances that irritate the eyes and often the upper respiratory tract. After being exposed, people can become teary-eyed and cough. Fleeing crowds may also have trouble maintaining a safe distance.

“That is exactly the mechanism that SARS-CoV-2 is predominantly spread," Oughton said.

Oughton is one of many health-care professionals calling for police to stop using tear gas on protestors. On Friday, more than 1,000 American health workers and students released an open letter demanding authorities treat systemic racism as a public health emergency.

“We are witnessing continuing demonstrations in response to ongoing, pervasive, and lethal institutional racism,” reads the letter, linking lack of access to the health-care system by Black people in the United States to reports of higher infection rates in African-American communities. “COVID-19 among Black patients is yet another lethal manifestation of white supremacy.”

Demonstrators at Sunday morning’s protest through downtown Montreal called for increased investment in Montreal North, one of the poorest districts in Canada. It has also been one of the hardest hit by COVID-19.

“It can’t be a coincidence that some of the hardest hit are the most financially burdened,” says Oughton. In Montreal North, half the households make less than $40,000 a year. Some 42 per cent of residents are immigrants, mostly from Haiti and Algeria.

“They are the ones who end up taking the low paying jobs,” said Oughton. “Which, in these COVID-19 times, end up being recognized as essential service jobs.”

Oughton says a higher rate of infection among essential service workers directly increases the risk for people who rely on those services.

“This is why it becomes an issue of public health for everyone,” he said. “It’s within our society’s interest to improve working conditions.”

Pharaoh Hamid-Freeman of Black Coalition New Generation, one of the organizers of Sunday morning’s Black Lives Matter demonstration, said he agrees with the open letter, and that government should treat systemic racism as a public-health issue, especially as protests continue through a pandemic.

“This is something that’s compelling us all," he said. "We’re going to take the risk.”

He said he was disappointed to see police used tear gas on groups of demonstrators who continued to protest after the official march.

Both Oughton and Hamid-Freeman said they would like to see police move away from tear gas as a tool to disperse crowds.

“You’re here to serve and protect,” Hamid-Freeman said, addressing the Montreal police department (SPVM), which declined to comment for this story. “You’re throwing gas on the fire.”