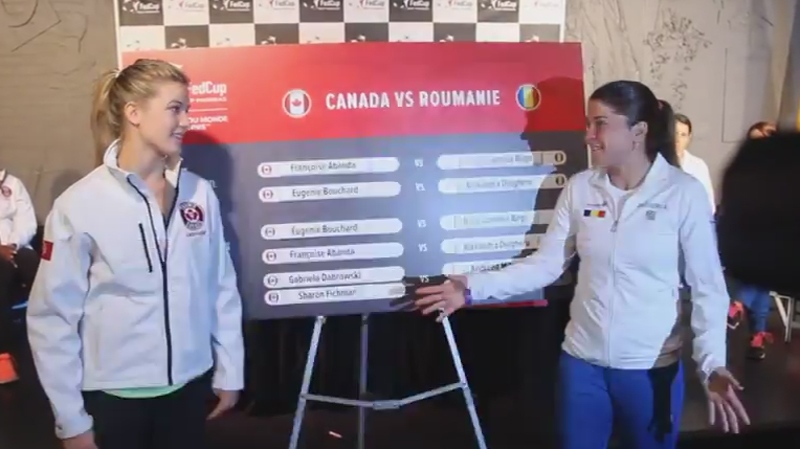 Westmount’s Eugenie Bouchard left an opponent hanging Friday when she declined to shake the outstretched hand of her upcoming rival at a Fed Cup pre-match press conference in Montreal.

Bouchard was posing for photos with 66th-world-ranked Alexandra Dulgheru of Romania who put out her hand to shake for the cameras.

Bouchard smiled and looked Dulgheru in the eye but did not unholster her right hand, which remained poised stiffly at her side.

"It's nothing personal towards her. I just don't believe in wishing my opponent good luck before the match. After we play I will shake her hand, no matter what happens," Bouchard told a Romanian TV crew.

The tactic proved ineffective, as hometown favourite Bouchard lost in straight sets, 6-4, 6-4, in front of a crowd of vocal Romanian supporters.

The Romanian team jokingly celebrated amongst each other following the victory by pulling back on handshakes with each other.

Bouchard did the same to Kristina Kucova of Slovakia last year. Canada and Romania are battling for a spot in the 2016 Fed Cup World Group.

If any player had done this to a Canada athlete, we woujld all be up in arms about it. Classless. Truly classless. http://t.co/O9PvUdKOgm

Genie Bouchard acting like a churlish brat while representing Canada. Not cool: https://t.co/CBybcLGZ5g