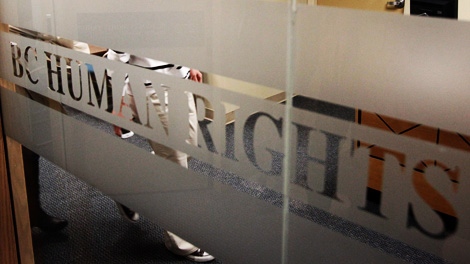 The office of the BC Human Rights Commission. (THE CANADIAN PRESS/Darryl Dyck)
MONTREAL -

The Quebec Human Rights Commission has refused to hear an Aylmer man’s complaint regarding a book containing a passage he considers offensive and unacceptable. The reading material was assigned to his son’s sixth grade class two years ago.

Quincy Francois was 12 years old and attending École de Cavaliers in Alymer when his teacher assigned him to read the book, called Un cadavre de classe, which contains the N-word.

Quincy later read the passage out loud to his father, Gioberti Francois, who proceeded to file a complaint with the school. Quincy says he didn’t fully understand what he was reading at the time.

In a statement, the school board said they removed the book from all elementary schools as soon as Gioberti made this complaint, but maintained that the novel was meant to spur discussion about racism.

However, Quincy says further discussion was never provided by his teacher.

“You can’t talk about the N-word without talking about the atrocity of slavery or colonization,” says Gioberti. “And I don’t think a child of 6th grade should analyze that at this stage.”

The book in question contains a passage which reads, translated from French, “in life, we don't always do what we want and we are often someone's nègre.”

In French, the word “nègre” can mean both negro or be used as the equivalent of a racist slur. Gioberti then decided to bring the case to the Human Rights Commission, which rejected the complaint.

“It’s very grave that the very institution mandated to protect us against racism and discrimination are normalizing the N-word for our children at school,” said Francois.

CTV Montreal reached out to the book’s author, Robert Soulieres, but did not receive a reply.

The Centre for Research-Action on Race Relations (CRARR) says they are disappointed by the decision, especially considering the book is still approved by the Quebec education ministry, although now only for high school students.

“It’s on the website of the ministry of education of Quebec and this book is classified as a roman d’humour, a humour fiction,” says CRARR executive director Fo Niemi.

Gioberti says that, with the help of the CRARR, he plans to return to the Human Rights Commission with the hope that it can better outline ways to deal with race issues.

A previous version of this story has been updated to attribute views on the passage in question to the complainant. It also indicates CTV tried to contact the author for comment, which was not included in the original story.