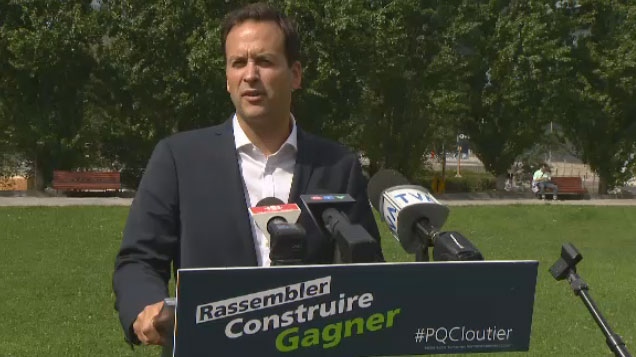 Tensions in the Parti Quebecois leadership race are again high, as frontrunner Alexandre Cloutier denounced rival Jean-Francois Lisee on Saturday for suggesting he had ties to a controversial Islamic cleric.

In now-deleted posts on social media, Lisee inferred that Cloutier's more moderate stance on secularism has garnered him support from Adil Charkaoui, who was once held on security certificate for six years on suspicion of aiding suspected terrorists.

"Mr. Cloutier has never been in contact, from near or afar, with Mr. Charkaoui and never received his support," he said. "Any insinuation to this effect is unacceptable from a candidate for the leadership of a large party like the Parti Quebecois."

On Saturday, Cloutier told media he has received death threats as a result of the accusations and had informed police of the situation.

On Twitter, Lisee said he "condemns with force the threat of violence and all intimidation towards my colleague."

Fellow leadership candidate Martine Ouellet came out swinging against both men on Saturday, accusing them of demagoguery.

Ouellet said the way Cloutier and Lisee discuss secularism is irresponsible and masks the real issue in the leadership race, which she said is Quebec’s independence.

In an interview with The Canadian Press, Ouellet said Cloutier’s suggestion to form a committee to study systemic racism to counter discrimination in the hiring of minority groups would be the equivalent of “trying all Quebecers for racism” and called the approach insulting.

Ouellet also spoke out against Lisee’s proposal to open debate on banning the burqa and niqab in public spaces, calling it “policing clothing.”