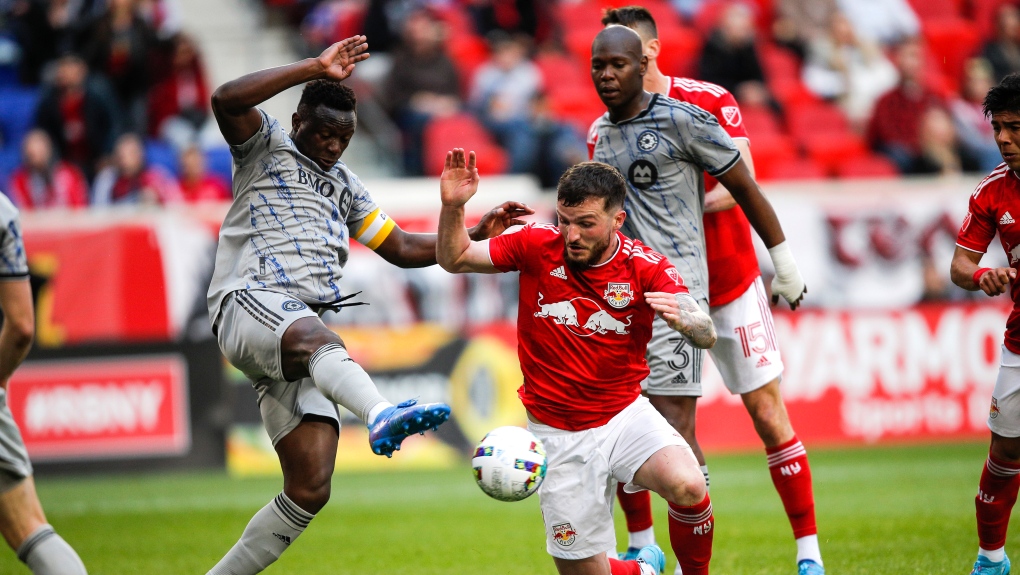 Saturday was Wilfried Nancy's birthday and Gabriel Gervais' first official outing as President and CEO of CF Montreal. Their players presented them with a nice gift, admittedly, with the help of a rival.

For only the second time in their history, CF Montreal picked up points in the standings at Red Bull Arena with a 2-1 win over the New York Red Bulls on Saturday afternoon.

On May 8, 2019, the then Montreal Impact earned a win by the same score. In their other 11 attempts, the Montreal team had only lost, some by stinging scores.

"It's hard to play a good game against the Red Bulls because they put a lot of pressure on you," said Nancy. "We saw the first 15 minutes, we were in trouble. We were struggling a little bit to get out, to be a little bit higher up the field. After we made three or four passes in a row, we found our game a little bit. After that, we did what we had to do."

Romell Quioto scored the decisive goal in the 81st minute after a disastrous howler by goalkeeper Carlos Coronel, who lost the ball near the centre circle while trying to restart the New York attack after a clearance by Rudy Camacho.

After finding himself with the ball at his feet, Quioto was able to sprint towards the opposing goal and he had no trouble pushing it into a completely empty net. 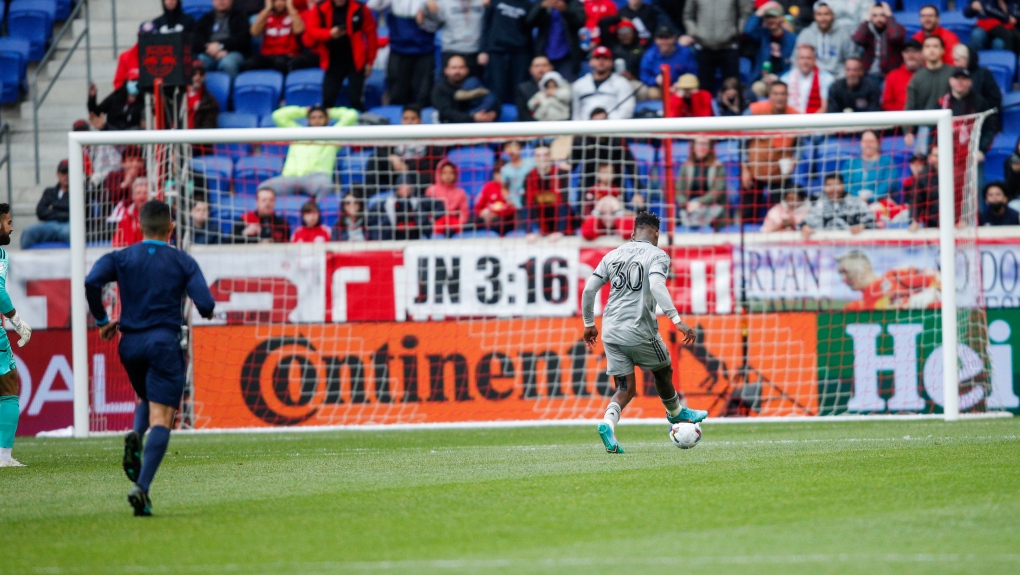 Camacho, also in the second half, scored the other goal for CF Montreal (2-3-1), who won their second straight game and played a third straight game without losing, all on the road.

The win came after CF Montreal conceded the first goal, Omir Fernandez's goal against Sebastian Breza in the 14th minute.

The CF Montreal players will finally have the opportunity to step on the turf of Saputo Stadium for the first time this season, next Saturday, when they will host the Vancouver Whitecaps.

With all their losses over the years at Red Bull Arena, Montreal may have developed an inferiority complex. And for the first half-hour of the game, Nancy's men played as if they had a complex.

Controlling the ball in the Montreal zone, the Red Bulls took the lead when Fernandez took a shot from about 20 yards out that seemed to deflect off Camacho's calf and into the path of Breza.

Then, in the 26th minute, with Breza out of position after a failed attempt to intercept a cross, Kei Kamara saved two goals on back-to-back shots from Aaron Long and Sean Nealis.

CF Montreal played much better in the final 15 minutes of play.

So much so, in fact, that they finished the first half with more shots attempted - six to five - than the Red Bulls.

Djordje Mihailovic in the 33rd minute and Kamal Miller two minutes later had good chances to score, but Coronel saved each time.

"(The Red Bulls) put a lot of pressure on and we had a hard time getting out of their pressing," said Camancho. "We had to break their pressure a little bit, we couldn't do it for the first 15-20 minutes, we were a little cornered on our goal. But we held on, we stood our ground, and we didn't concede that second goal that could have been complicated for us."

After a slow start in the second half, CF Montreal tied the game with a contribution from three defenders in the 71st minute.

Miller first slipped the ball to Alistair Johnston, who was in close proximity to him. Johnston directed the ball into the center of the box where Camacho had snuck in.

Camacho skillfully headed the ball to the right of Coronel. The ball hit the inside of the post before rolling into the back of the net.

"Kamal and Ali were on-side, I was already in front, so I decided to stay. And there you go, I did well. We scored, there are three defenders in on the action. That's cool," said Camacho.

Ten minutes later, Coronel made his incredible blunder and CF Montreal managed to protect their lead.

-- This report by The Canadian Press was first published in French on April 9, 2022.

Canada to upgrade Latvia battlegroup to a brigade, boost number of troops

Canada has signed an agreement to upgrade the 2,000-soldier battlegroup it leads in Latvia to a brigade, boosting the number of troops and pledging to lead it for at least the next five years.

DEVELOPING | Opioid manufacturer agrees to $150M settlement after class-action lawsuit led by B.C. asks for $60B

British Columbia says a proposed $150-million settlement with Purdue Pharma Canada has been reached for the recovery of health-care costs related to the sale and marketing of opioid-based pain medicines.