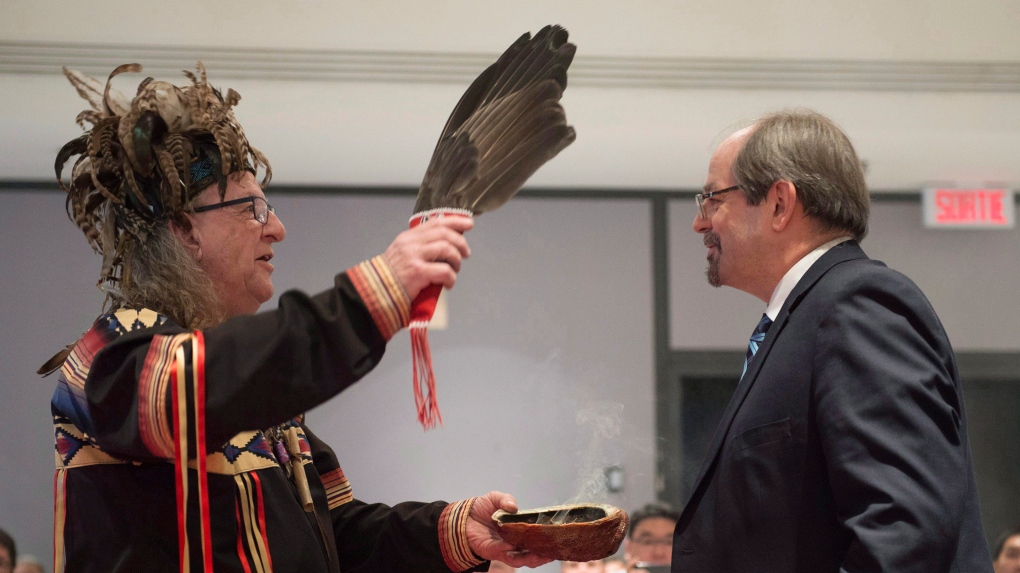 Quebec Native Affairs Minister Geoffrey Kelley stands in front of Huron native Raymond Gros-Louis during a ceremony at the beginning of a consultation with Indigenous leaders, Wednesday, January 25, 2017 in Quebec City. THE CANADIAN PRESS/Jacques Boissinot

MONTREAL -- The Quebec CAQ government of Francois Legault has turned to a former Liberal cabinet minister to negotiate with the Kanien'kehá:ka (Mohawk) community of Kahnawake.

Geoffrey Kelley served as Indigenous affairs minister under former Liberal premier Philippe Couillard, and has been appointed as negotiator with Kahnawake, on Montreal's South Shore.

The now-retired MNA will represent Quebec in talks with the community on issues including the ongoing Mercier Bridge reconstruction, youth protection and the environment.

"I don't come to this as a complete stranger," Kelley told CTV News, who worked with former negotiators. "I understand it's importance."

Kelley said Minister Responsible for Indigenous Affairs reached out to him around three weeks ago with the possibility of taking the post.

"Obviously it's a very important challenge, and I've always understood the importance of the relationship between the Quebec government and the community of Kahnawake," said Kelley.

He was pleasantly shocked at the announcement.

"(I'm) surprised that the CAQ would appoint somebody across party lines, and I think it's a good move," said Delisle. "They have done some very good things in terms of strategy and this is along those lines."

Kelley will take office on June 14, and will succeed Florent Gagne.

"As the former Minister responsible for Indigenous Affairs, Mr. Kelley is more than qualified to represent Quebec at the negotiating tables. I am confident that his expertise and approach will help improve the living conditions of the Mohawks of Kahnawake and continue to bring us closer together as a nation," said Minister responsible for Indigenous Affairs Ian Lafreniere in a news release.

Delisle said Kelley's work on Kahnawake reacquiring lands along Highway 30 is an example of his understanding of the community's place in the region, its history and ongoing issues.

"I know Geoff is a good man, and I know his heart is always in the game, and I welcome him back if I'm still there after July 3," said Delisle.

The Mohawk Council of Kahnawake will hold elections July 3. It will be the first election since long-time MCK Grand Chief Joe Norton died in 2020, and the first time a new grand chief will be elected since 2004.

Kelley said he's spend the summer getting up to speed on the current files.

"I'm looking forward to it very much," said Kelley. "I think it's a big challenge."

CTV Montreal would like to clarify that former Liberal minister Geoffrey Kelley did not cross party lines, but was rather appointed by the CAQ government as a negotiator in a non-political position with the community of Kahnawake.