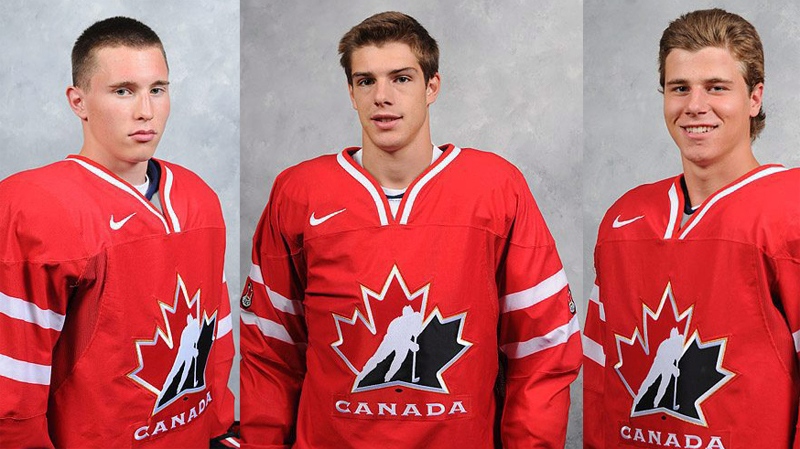 Gallagher, 19, is expected to play a key offensive role for the squad having racked up 46 points in 28 games for the Vancouver Giants this season.

Defenceman Nathan Beaulieu, who also impressed at Montreal training camp, has 26 points in 30 games for the St. John Sea Dogs.

Forward Bournival has totaled 24 points in 16 games for the Shawinigan Cataractes.

Hulking 6'6" American Jared Tinordi, who recently signed a three-year contract with the Canadiens, will be skating for the U.S. in the tournament.

The Canadian team opens their four-game pool schedule against Finland with Mark Visentin getting the nod over Scott Wedgewood for the goaltending role.

Coach Don Hay has maintained since selection camp earlier this month that Visentin is his No. 1 goalie because of Visentin's experience playing in the 2011 tournament in Buffalo, N.Y.

But after Visentin gave up four goals on 17 shots and Wedgewood stopped all 10 shots he faced before the Swedes scored an empty-net goal, questions arose over which goalie was the most ready for the tournament.

Hay did say he plans to play both goalies in the tournament. That's not unusual.

The backup often gets a game in the preliminary round against the weaker country promoted from the second-tier world championship, which would be Thursday's game against Denmark.

"Both goalies feel, at least I feel that way right now, is that both goalies feel there's confidence coming from me to them," Hay said. "No matter who we play, no matter what time of the game it is, or against whoever, I think the goalies should have a lot of confidence."

The U.S. meets Denmark in the later Pool A game in Edmonton. Latvia and Sweden open Pool B games in Calgary on Monday afternoon, followed by defending champion Russia versus Switzerland at night.

The top team in each pool earns byes to the semifinals. The second and third seeds cross over to meet in the quarter-finals.

Canada has won a medal in this tournament 13 straight years, including five gold from 2005 to 2009, and has played in the final every year for the last decade. Canada took silver the last two years.

Securing the bye to the semifinals provides rest and an extra day of preparation to the countries who earn them, but in recent tournaments, the bye hasn't been that much of an advantage.

Canada opens against the Finns after beating them 3-1 in an exhibition game Dec. 19. Finland played hard in that game despite having just recently arrived in Canada.

"We were in that game," Finnish coach Raimo Helminen said. "I don't know if we can be better but I hope so (that) we can compete against the big favourite."

Helminen, too, was secretive on the subject of his starting goalie. Chris Gibson, who plays for the Quebec Major Junior Hockey League's Chicoutimi Sagueneens, was outstanding his two periods of the exhibition game against Canada.

Sam Aittokallio played the last period and the Colorado Avalanche prospect has the experience of playing one game in the tournament in Buffalo.

The Finns last won this tournament in 1998 and are looking for a bounce-back year after finishing sixth in Buffalo. They have six returning players, as well as a player who is considered the best one outside the NHL this season in Mikael Granlund.

The first-round pick (ninth overall) of the Minnesota Wild is a player Canada must pay attention to, says Hay.

"The Granlund line is a very talented line," Hay said. "They're very explosive and they're the key I feel to their team and we have to make sure we limit their offensive opportunities."

Canada went 2-1 in pre-tournament play. Visentin of the Niagara IceDogs made 22 saves in the exhibition games versus the Finns. The first-round pick of the Phoenix Coyotes is more conservative in his movements in net than the acrobatic Wedgewood.

Visentin was handed the starting job for the medal round in Buffalo and backstopped Canada to wins in the quarter-final and semifinal. Canada was leading 3-0 heading into the third period of the gold-medal game, but Russia scored five unanswered goals on Visentin to take the title.

He's never shirked from addressing his role in the collapse. The maturity and experience he gained through that experience is considered valuable to Canada's chances in this tournament.

"My mentality is the same as the team's," Visentin said Sunday. "We want to get better each and every day and once the tournament starts we need to bring our 'A' game every day so that's what I'm going to do."

Wedgwood, who plays for the Plymouth Whalers, stopped 24 of 25 shots in Canada's 7-1 victory over Switzerland on Thursday. The third-round pick of the New Jersey Devils was a standout in selection camp.

"The coaches are going to make a decision they feel comfortable with and as a goalie you've got to deal with it," Wedgewood said. "When you get your opportunity, take it."

The Canadian team spent Christmas Eve at the home of Edmonton Oilers president of hockey operations Kevin Lowe and then received Christmas gifts from Hockey Canada back at their hotel.

"The last week has been fun, we worked on a lot, I think we got a lot better and we became closer as a team, but the tournament is finally here and the atmosphere is going to be great," Canadian captain Jaden Schwartz said. "Finland is going to be a first tough contest for us so we're real excited."