Call of the Wilde: The Habs were flying 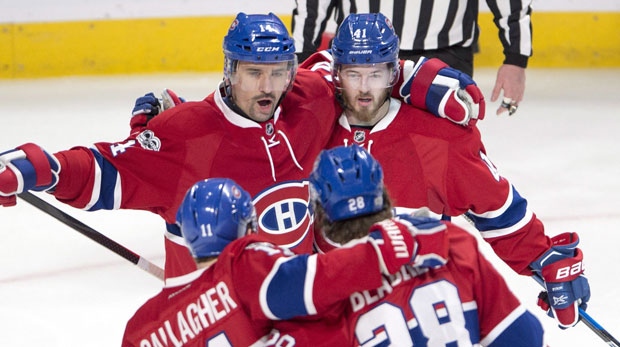 - Right out of the gate there were some Habs flying. Brendan Gallagher with a three-assist first period. He was carrying a ton of speed through the neutral zone. The change of style that Julien has implemented has helped Gallagher. It focuses on puck support that Julien calls the swarm. It leads to more speed through the neutral zone for everyone and makes Gallagher a lot harder to catch and contain. Classic Gallagher on his goal - a little man who somehow is hard to move with the deflection in front.

- Paul Byron also came out flying and notched two goals in the first. 22 goals on the season for a waiver wire pickup. The Flames protected two extra goalies to lose Byron, the story goes. Both of those goalies are not on the Flames team. Remember, too, that 25 teams passed on Byron as well, so you can't say only the Flames blew it. This kid was almost in the KHL. He was on his last legs here. He credits the contract Bergevin gave him as the key to his success. To finally not have to worry if he would survive, to have a chance to settle down here with his family, to have three years of security as massive to his success this season. What a steal too for Bergevin at 1.2 per season.

- The final member of that trio that was flying is Tomas Plekanec. He scored a goal by heading to the net. It's not fun and it's easier to turn to the corner but you can see how easy he made that goal look. It's like that when you one-time it from five feet - the goalie doesn't even have time to set.

- Not only Nathan Beaulieu's best period of the season with two assists, maybe his best period ever. Beaulieu had his skating legs. I think Beaulieu using his ability to clear space for himself in the neutral zone is the key to his success. Keep the defensive zone exit simple. Skate like you can, backing people up when you have the neutral zone. This sets up his attack zone vision to come to the fore. I have always believed a great defenceman is waiting to arrive. First time that we saw glimpses of that greatness in a while. Whatever he was thinking about in this one, he needs to keep thinking about. He's too good to be a healthy scratch.

- Alex Radulov had big energy again. He's been gaining bit by bit his energy back. Radulov as a strong playoff performer is a must. The 2-on-1 pass to Pacioretty for his 35th of the season was unselfish and perfectly placed.

- Every time Martinsen gets in I can't see why he doesn't stay in. Julien wants to have a lot of players ready for these playoffs so King, Martinsen, Mitchell and Ott are a part of a rotation. It would be a big surprise when the playoffs start, if Martinsen isn't in the lineup.

- That 5-on-3 kill for a minute and a half was a thing of beauty. Plekanec doing superb work high and Emelin and Petry filling the lanes down low. When a shot did get through, Price was waiting for cross-ice passes like the game is so slow.

- Julien's system required a lot of change. The player who struggled most with it was Alexei Emelin. He was trying to learn the swarm but swarming at the wrong time. He was trying to learn the 4-go but went at the wrong time. It seems as if slowly he's picking it up and his game is improving. This was steady to excellent. Emelin was plus-3 in the first period.

- What a sensational season for Max Pacioretty. 35 goals as he once again puts up big numbers. More than even that though, what a year for him as a captain. He’s put countless hours in front of the media answering good questions and bad with grace. He’s always putting the team first in his thoughts and answers. He’s making sure he kept everyone on an even keel during difficult moments.  Everything that he learned last year as a first-year captain he took to work this year. You can talk about the goals and the points – those are givens. He's done that every year that he maintained his health. The real revelation this year is what an outstanding captain he became.

- Seven minutes left and up by two the fourth line comes over the boards. No worries because they looked exactly like the other lines in the game. Ott, Martinsen and King with his best as a Hab were all strong.

- The Montreal Canadiens had the biggest collapse in their franchise history last year. This season they turned it around completely earning a playoff spot and are on the verge of winning the Atlantic Division. On the night they earn that post season berth, this section stays empty.

- Claude Julien is 13-5 and 1 as Habs head coach and that is a remarkable turnaround for a team that was failing miserably toward a playoff miss. The club plays tighter defensively, is superior killing penalties 22nd under Therrien and 8th under Julien, carries a lot more speed through the neutral zone, and absolutely swarms the opposition until, as Pyatt said in Ottawa, "it feels like they had four guys on us all night."