Call of the Wilde: Seize the day 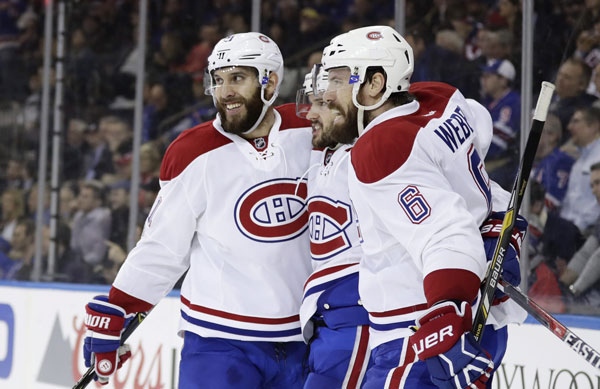 It's the best Habs roster in a generation. The tenor of the games in the first round sees the Habs solidly controlling post-season play for the first time in a generation; even when they advanced beyond the first round in the last decade and gave fans high hopes it did not resemble this. The two times since 1993 they have made it to the conference finals, they relied heavily on their goalies.

When you have a true chance to make it to the finals of the Stanley Cup playoffs, it's the other team's goalie everyone is talking about. Not yours. That is the script here as Henrik Lundqvist is so far writing a New York crime novel.

When the Habs made it to the conference final in 2011, the reason they got there mostly was Jaroslav Halak. He turned in 50 save performances when the ice was tilted significantly in Washington's favour and then Pittsburgh's before reality finally set in against Philadelphia. It was fun for fans to chant Halak, but needed 50 saves is not how cups are won. It takes a strong goalie of course, but Houdini in the form of a 1993 Patrick Roy isn't the norm; it's the miracle.

When you actually do have the ability to go far legitimately, it looks just like this against the New York Rangers. It's the Rangers who have Halak in net so far. Lundqvist with a shutout in game one and another strong performance in game four to leave the series a best-of-three to decide it. Lundqvist is stealing it and Price has not had to, but he has been an excellent .940 just the same.

The Canadiens didn't match the Rangers intensity in game four. One team was desperate and the other team was not. You cannot win when only the other team thinks it's The Hunger Games.

Look at Rick Nash. His desire in game four was not equalled. He bowled over Carey Price and he never had to answer for that. With that free pass given in the first period, he then spent the night flying through the crease and scored the winner in that very fashion. A hungrier Habs team didn't let that happen in game one where there were many examples of Habs ganging up on anyone who dared venture close to their goalie. They have protected Price with intensity all series but in game four they had a generous and welcoming spirit.

Now comes the moment of truth – or perhaps as many as three moments.

Game five is at the Bell Centre where the place will be rocking but the Rangers have been rolling on the road well this year. They have the best record this year away from home in the league. They're not afraid of two potentially in Montreal.

Momentum is so precious in sports. You can feel in control and boom -- in a moment, it can be gone.

The Rangers were 18 seconds away from a dominating lead. They allowed the Plekanec marker and then the Radulov overtime winner and they were shaken. Their momentum was gone. The Habs were in control.  Cue the Habs to not take care of that momentum.

This series will surely have another momentum moment still to make one side feel like they are destiny's child and the other side feel forsaken.

This Habs team should not let this moment pass without a true understanding that they have the tools to go all the way. Sure, they're not perfect. No team is perfect in the salary cap era. It would take $20 million more to plug the perfect players into spots that money is not allowed to buy. There will always be holes in a salary cap roster but this team is so much closer than any before it since 1993.

They have the best goalie in the world in the prime of his career. Price's talent and even his leadership skills should not be wasted.

They have the best shutdown defenceman in the NHL in Shea Weber and probably the second-best defender in these playoffs behind only Erik Karlsson. Weber doesn't look like he's slowing down one bit. He's logging 29 minutes of ice time while Subban is the 4D in Nashville. The trade was designed for now and the next three years. The "now" they have at this moment may not come again though.

Injuries can hit at the wrong time. Chemistry can change. Unrestricted free agents have to want to stay here. There are so many intangibles. This moment must be seized for tomorrow is never guaranteed, especially in the cap era. It's not a linear progression of getting better. It can go the other direction quicker than you think.

Price will soon cost much more. A Pacioretty raise is due. Galchenyuk is on the verge of a massive salary jump. Markov will eventually age. This is Plekanec's final act. Just because a GM has been building for five years, it is no guarantee that year seven sees the improvement continue. Building in the cap world is not a straight line.

When Marc Bergevin shores up the middle, it naturally weakens the line up somewhere else. It is never perfect.

The Capitals are the best cap model for eight years but look at their struggles. Can't even get to a final. This year they're in tough again in the first round against the Maple Leafs. Everyone now thinking the Leafs are the next great cap model to come with all their talented kids but the window on these kids wanting 8 million is already inching the wrong direction. There will never be a 1980s dynasty Oilers again of four cups in five years and five in seven. Nor will there be an Isles of four straight before that. So you have to seize your time. When a player says "show me the money" after that I'll show you a weaker team.

So the time for the Habs is now.

The roster is right. The coach is right. The goalie is right. The 30-minute defenceman is right. The city is primed. The Habs play like they're the better team. They're on their toes pushing the pace. It's all in front of us and everyone is just waiting for them to seize the day.

They have to find that desperation. All the talent won't mean much if the other team is crashing the net in hunger and you're hanging to the outside saving it for another day.

Now time to execute that lesson or the best Habs team in a generation won't be playing hockey this time next week.

The t-shirts the Habs are wearing for these playoffs say "all in." Three games to decide if that is just a slogan on their chests or an undeniable feeling in their hearts.