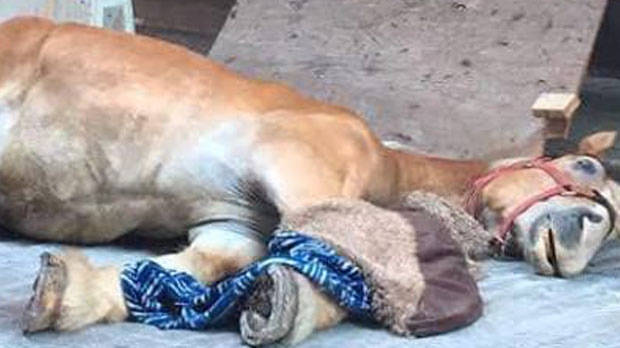 A horse died suddenly in Old Montreal on Sunday.

People called 9-1-1 around 3 p.m. Sunday when the horse suddenly went into convulsions, and according to witnesses began coughing uncontrollably.

The caleche driver asked his clients to get off the wagon shortly before the animal fell to the ground.

Police arrived immediately to control traffic, while other authorities removed the animal from St. Jean Rd. near St. Sacrament Rd.

The SPCA arrived half an hour after the collapse and determined the horse had already died.

The provincial Ministry of Agriculture (MAPAQ) is now conducting an investigation into what occurred.

"This is such a sad story, we've seen over the weekend. But to me it just reinforces our will. It doesn't make sense to have caleches in the streets of Montreal any more. Horses should be somewhere else," said Mayor Valerie Plante.

In June, the city introduced a plan to ban the controversial horse caleche industry starting in 2020.