Cabot Square tent for homeless struggles to meet demand; some show up with frostbite

MONTREAL -- A warming tent built for the homeless in Montreal's west end has been extended until the end of March, but now organizers are faced with a big challenge: finding the money to operate it.

They're wishing, for example, they had a nurse on hand, considering the significant problems homeless Montrealers are facing this winter and the often ad-hoc response.

“People come in with frostbite,” said Nakuset, the director of Montreal's Native Women's Shelter and a central organizer behind the tent project.

“They come in and they’re in a lot of pain and we do run off to the pharmacy to try to find the appropriate things we need, but if we had someone with a [medical] background, that could help. That would be incredibly wonderful.”

The all-night warming tent opened February 2 at Cabot Square after an outpouring of aid and donations from the Indigenous community, other Montrealers and the city of Montreal.

It was named in honour of Raphael Andre, an Innu man who was homeless and who froze to death in January near a homeless shelter on Parc Ave. The shelter had been closed at night due to COVID restrictions.

The Cabot Square tent was set to close next week, but it has been a big hit, with the 15 indoor spots used nightly, and sometimes by 28 people over the course of the night, Nakuset said. 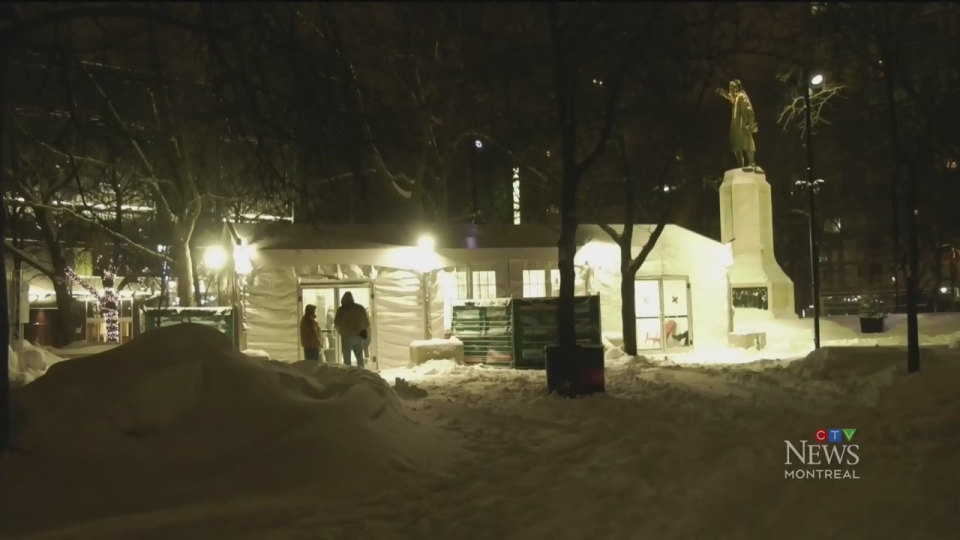 So organizers have asked the city to extend the tent's term, and on Thursday, the city authorized the use of the land and the tents until March 31.

The city hasn't created a cash budget for the project, but is instead funding it by providing the tent and covering the electricity and heating bills.

Nakuset says the next challenge is raising the operating funds.

The $60,000 raised from various sources, including GoFundMe, has not been used up yet, but Nakuset told CTV News that she estimates she'll need about $100,000 more to cover the salaries of some who work there, and for food and supplies.

She's also hoping the wished-for nurse will materialize, she says, because of the frostbite and the other problems people show up with.

The tent’s popularity also shows how necessary a nightly warming tent is in that area of the city, Nakuset said. Many of the nighttime resources for the homeless are further east.

“The thing is," she said, "when you’re in one particular area, you don’t want to travel all the way across the city to go to another place, especially if you get there and they tell you there’s no room.”