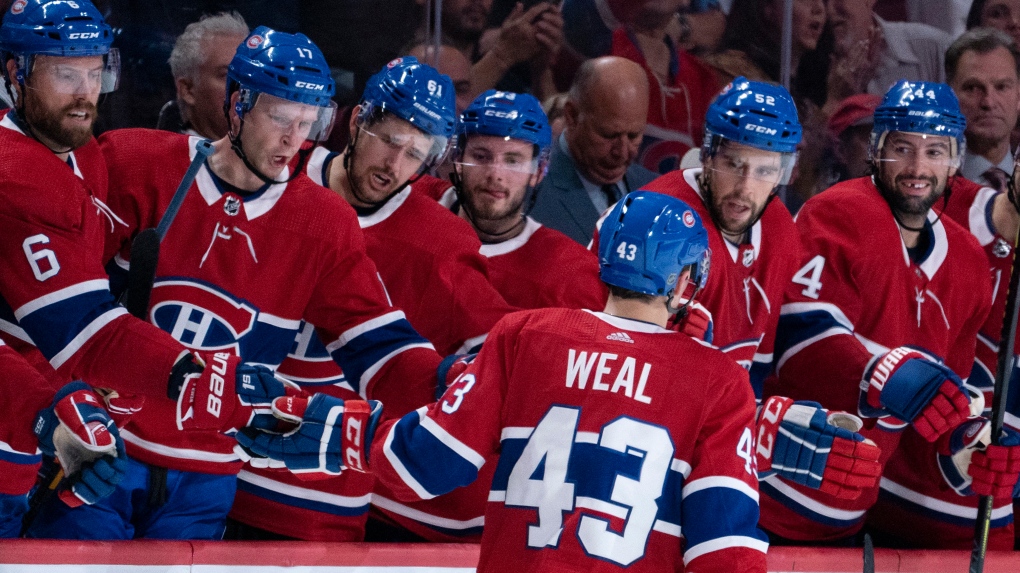 Montreal Canadiens' Jordan Weal is congratulated by teammates after scoring past Florida Panthers goaltender Sam Montembeault during a shoot out in pre-season NHL hockey action in Montreal on Thursday, September 19, 2019. THE CANADIAN PRESS/Paul Chiasson

The Montreal Canadiens' offence did just enough in regulation, and in the shootout, to remain perfect in the pre-season.

Brendan Gallagher scored twice in regulation and the Canadiens downed the Florida Panthers 5-4 on Thursday in pre-season action. Nick Suzuki, Jordan Weal, and Phil Varone all scored in the shootout for Montreal.

"It was nice to see pucks go in the net," said Gallagher. " It was a good start. Hopefully something to build on,"

But it was Suzuki's play that drew rave reviews as he earned two assists and scored a Pavel Datsyuk-like goal in the shootout.

"I worked on it a couple times," said Suzuki. "It was a great feeling to finally put one into the net. It was pretty cool,"

"Ask him if he did it on purpose, I don't know," Gallagher said. "Might've just fanned on the puck. No, it was pretty nice. I can't do it. So it's pretty special to see obviously.

The 20-year-old Suzuki is fighting for a spot in training camp, along with other youngsters Ryan Poehling, Josh Brook, and Cale Fleury.

"These kids, they come in with a ton of confidence. And they should," said Gallagher. "It's obvious enough that these guys are really knocking on the door. And we're going to have to make some tough decisions near the end of camp," Canadiens' head coach Claude Julien said.

Weal and Brett Kulak both scored in the second period for the Canadiens.

It took the Canadiens 61 seconds to score their first of the night.

Weal skated around Panthers defenceman Anton Stralman before driving to the net and slipping the puck underneath Montambeault's right pad. Suzuki and Shea Weber picked up assists on the goal.

The Panthers equalized with over five minutes to go in the opening period on their third shot of the period. Tippett fired a shot past Price after receiving a pass from Ang. Ethan Prow also assisted on the goal.

Greco scored more than 90 seconds into the second period give his team the lead. Ang scored on a partial breakaway just over a minute later to give his team a 3-1 advantage.

But the Canadiens responded with three consecutive goals. Gallagher scored his first of the pre-season at 5:16 of the period to bring his team within a goal.

Kulak then tied the game 3-3 with 7:29 to go in the second, after he directed the puck past Montambeault off a Suzuki pass.

Gallagher then scored his second of the night after redirecting a pass from Arturri Lehkonen from the front of the net.

The Canadiens were without forward Paul Byron for the third period, as he left the game with an undisclosed injury. The Panthers would tie the game in the period thanks to Connolly. Julien said he'll be evaluated for "precautionary reasons" and hopes to have more details by Friday.

Only Vincent Trocheck could score for Florida in the shootout.

The game was the second encounter between both teams in 24 hours. The Canadiens defeated the Panthers 4-3 during the 2019 Kraft Hockeyville game in Bathurst, N.B., on Wednesday night.

The Canadiens have four pre-season games remaining. The team's next game will be Saturday night when they play the Ottawa Senators at the Canadian Tire Centre. Meanwhile, the Panthers will play a road game against the Dallas Stars on Saturday.

This report by The Canadian Press was first published Sept. 19, 2019