Bar tabs may be about to rise, as heatwaves and labour shortages hit beer prices

MONTREAL -- In addition to gas at the pump, your morning cup of coffee and burger at lunch, the price of a pint at happy hour may be the latest to jump.

Massive heatwaves in western Canada and the United States this summer combined with labour shortages and supply chain issues have caused the price to produce a pint of beer to rise in recent months.

Renaud Gouin is co-owner of Avant-Garde craft brewpub in East Montreal, and he said it's become harder and harder not to raise prices on his pints.

"It's quite hard because at the same time there is so much competition right now for micro-breweries in Quebec," said Gouin. "I would like to raise my prices, but, at the same time, I have to keep my sales going, so I'm crushed between the two."

Gouin said there are around 300 microbreweries in Quebec already struggling with staff shortages, and they now have to worry about commodity prices rising.

Corn, wheat, barley and canola future prices have all gone up, according to Sylvain Charlebois, senior director at the agri-food analytics lab at Dalhousie University in Halifax, and that will affect how much it cost to create a quality IPA, lager or pilsner.

"Brewers aren't immune to what's happening and also so they are paying more for inputs as well," he said.

Barley is essential to brewing beer and a Statistics Canada estimated yield analysis shows barley production dropping by around 27 per cent in 2021, joining canola, oats, wheat and other crops whose production is likely to significantly drop this year.

Gouin added that the drought affected fruit costs which has caused the price to produce his Rouge Frambroise, Archipel Hochelaga and other fruity drafts to rise.

"And they're talking about a shortage for next year, so obviously that will affect us," he said. 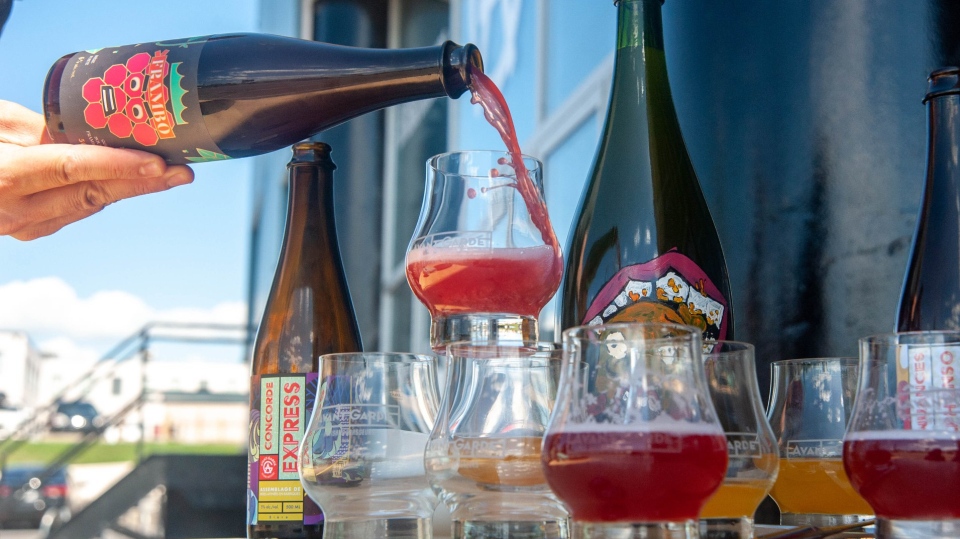 Fruit costs have increased due in part to the massive heatwaves and droughts in western North America meaning craft breweries need to pay more to create their popular pints. SOURCE: Avant-Garde/Facebook

Bar and restaurant managers and owners have spoken since reopening post-COVID-19 pandemic lockdowns of difficulties in rehiring staff or of having to pay higher wages than they did before March 2020.

"If you go retail you're likely still going to be asked to pay more for beer, but not as much as if you go to your favourite watering hole," said Charlebois. "They are likely going to charge you more for two reasons. One, to make beer is costing more and just serve that beer to you is also costing them more money as well."

Brewers, Gouin said, have not felt the price of barley's increase on their bottom line yet, but he expects that it might.

Charlebois added that a commodities prices shot up in 2008 triggered by the food-to-fuel phenomena that resulted in biodiesel and ethanol production rising. He said if the harvests in the Southern Hemisphere are good, it will help to replenish stocks in the Northern Hemisphere.

"Prices will fluctuate from time-to-time, so we're not going to run out of anything," he said. "It's just costing more for processors to get the ingredients they need to produce whatever they're producting."

Labour remains the most worrying cost at the moment for owners like Gouin. Avant-Garde, like most brewpubs, has a restaurant and taproom that requires a full staff, which has been hard to keep filled.

"That part is very hard to get staff especially for cooking and otherwise, it's very hard to recruit," he said. "The wages have gone up dramatically and we've had to adjust our price on the food cost. Everyone sees that right now, and I think it's very problematic."