At 96 years old, Rhoda Wurtele descends a ski slope with the same ease as she did 70 years ago.

In 1948, with the eyes of the sporting elite on her, Wurtele was set to compete in the alpine skiing event at the Olympics in St. Moritz, Switzerland – the first to take place since World War II ended.

But she wasn’t alone: Wurtele’s identical twin sister, Rhona, was there by her side; a natural partner in life, and sport.

"We were so even, you know? In all the sports-- and we did every sport we could think of," Rhoda explained. "We loved it." 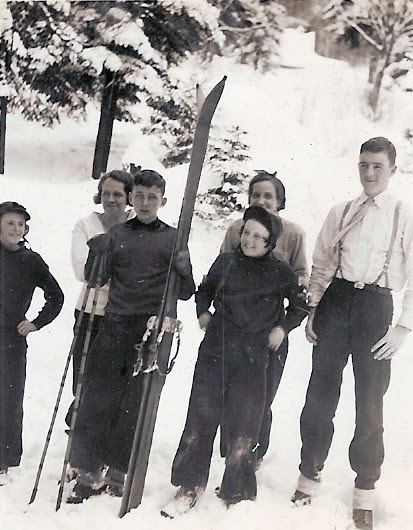 The Wurtele twins are ready to hit the slopes in this undated childhood photo. (Courtesy of the Wurtele family)

At the young age of five, the story goes, Mr. Wurtele strapped wooden planks to his daughters’ feet and pushed them out the front door of their Westmount home and into the powdered snow.

“My father gave us skis, and we just started walking down the street,” Rhoda recounted. “Then [we’d] go to the park, gradually go up the mountain – let’s find more stuff to ski, you know?”

By the age of nine, the twins had skied off the senior ski jump on Mount Royal, much to the chagrin of their older brother, who put them up to the challenge.

"'When are you going over the senior [jump]?' He asked. And we said 'right now,'" she explained.

The pair would ski and perform jumps up at the summit of Mount Royal, and eventually competed throughout North America as representatives of the Penguin Ski Club.

As soon as they began competing professionally, the twins consistently captured hearts and titles: the Kate Smith International, the Alta Cup, the Roch Cup and the Silver Dollar Derby among them.

One particularly notorious run took place at Mont-Tremblant in 1946, when Rhona surpassed her male and female counterparts with a 24 second lead.

When they proved they could beat European skiers, they were invited to compete in the 1948 Olympics, held in Switzerland that year.

The Wurtele twins, together, would make up the entire 1948 Olympic Women’s Alpine team for Canada.

“They had someone who they thought they could rely on,” Rhona said, laughing. “It was the beginning, and a great honour, and it was really exciting.”

Together they would travel by train to New York to board a Europe-bound vessel, the RS Queen Mary.

Rhoda remembers their travel time coinciding with a spate of inclement weather, the “greatest storm [the U.S. had] seen” in several years.

Until the twins touched down in Europe, that is. 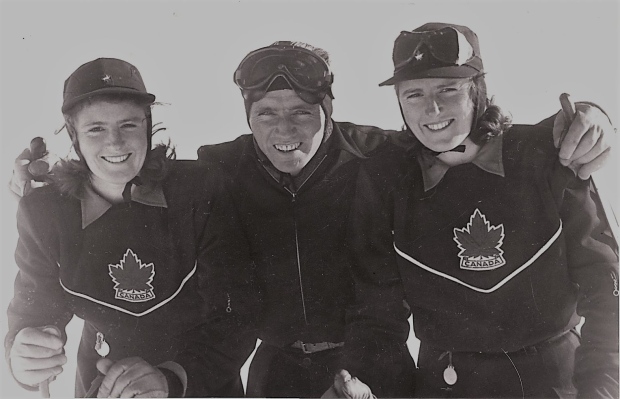 As the first Winter Games in a post-WWII era, they were dubbed “The Games of Renewal,” but nonetheless affected by a strenuous 18-month planning period and numerous financial constraints.

Of the 669 athletes from 28 countries, only 77 women competed in the Olympics – the Wurteles among them.

1948 was also the year that alpine skiing made its debut as an Olympic sport.

During the opening ceremonies in St. Moritz, the twins paraded in together, leading the ski group.

“Oh we were terribly excited, of course,” Rhoda explained. “It was just too much. But we were the only girls – so we joined the men’s team.”

But the glory was short-lived: both women suffered injuries while training.

Rhona opted to compete despite her injury, and with one sharp turn, all hopes of climbing the Olympic podium were dashed.

“I flew up in the air, and my right ski hit the left ankle,” she said. “I heard this loud crack – and it broke.”

Rhona would go on to shatter her leg in a downhill run, finishing last. She would ultimately withdraw from the other skiing events.

But even now, as nonagenarians, the twins are at peace with the fateful twists that terminated their dream of Olympic gold.

Not all was lost, however – together, they created memories and friendships that have lasted through the passage of seven decades.

“We’re still friends with a couple of the men,” Rhoda chortled.

In an almost serendipitous event, Rhona would meet her future husband Gene Gillis in St. Moritz, where he was competed on the American alpine skiing team.

Like his future wife, Gillis – referred to as a "gorgeous God" by sister-in-law Rhoda -- would go on to injure himself during a training run and withdraw from the games.

Eight months after the games, back on Canadian soil, the sisters would enter another life venture together: marriage.

On November 13th, 1948, the women married their respective partners in a double ceremony at St. Stephen’s church in Montreal. 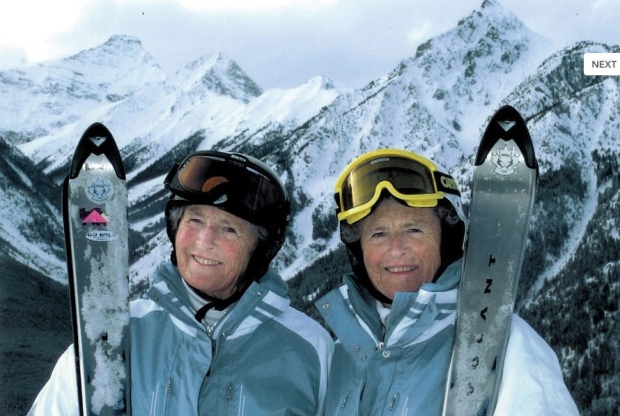 Rhona and Rhoda Wurtele in an undated photo. (Courtesy of the Wurtele family)

Despite the twins’ disappointment at the Olympics, the twins would go on to celebrate an inextricable love for each other, and for alpine skiing.

After a quick recovery from her injury on the Swiss slopes, Rhoda would do on to compete in all three alpine skiing events at the 1952 Winter Olympics.

Even after having children, the pair would compete through 1959 and go on to teach the sport – first to their children, then the community through a number of community organizations, and in the 60’s, to women and children.

In 2012, they were inducted into the Pantheon des sports du Quebec.

Throughout the decades, the twins have inadvertently proven that a love of sport is part of their heredity. At one time, the twins were part of Quebec’s provincial golf team.

Rhoda is the mother of an expert golf and ski instructor, as well as a world champion acrobatic skier.

And well into her 90’s, Rhoda remains active – now encouraging their great-grandchildren how to navigate the hills.

The Wurtele twins are lauded as pioneers in the skiing world, although the circumstances of their competitions were widely different than those we see today.

"Nowadays, competition in the Olympics is a serious business," Rhoda said. "It's a whole different world."

But navigating that world with her, as always, is her twin sister.

Even after seventy years of international travel and tandem competition, today, Rhoda and Rhona are neighbours.

"I moved three times in that building just to get up beside her," Rhoda said, chuckling.

"I really thought that after a certain time, people should separate and go their ways," Rhona added.