American Navy ship stuck in Montreal due to icy conditions 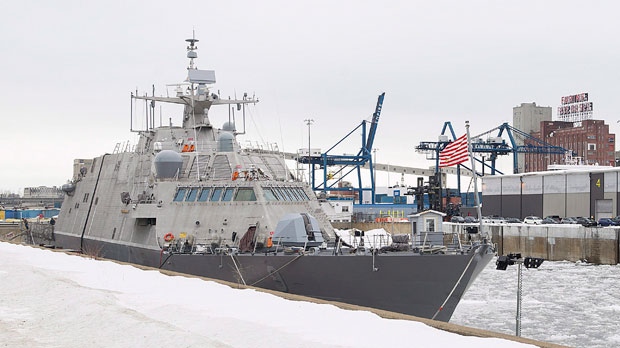 The USS Little Rock is shown moored in Montreal's old port, Sunday, January 21, 2018. A newly commissioned Navy warship will be wintering in Montreal after its journey to Florida was interrupted by cold and ice. THE CANADIAN PRESS/Graham Hughes

A brand new Navy warship that has been stuck in Montreal for weeks will spend the winter in Canada after its journey to Florida was thwarted by cold and ice.

The USS Little Rock was commissioned in Buffalo on Dec. 16 in a grand ceremony attended by over 8,000 people that featured a brass band, speeches by military leaders and a chaplain who prayed for "fair winds and following seas."

But it hasn't gotten very far since then, after its maiden journey was complicated by unusually heavy ice conditions that have kept it in Montreal since Christmas Eve.

Now the Navy has decided to wait until weather conditions improve before allowing the ship to continue to its home port in Mayport, Fla., according to a spokeswoman.

"The temperatures in Montreal and throughout the transit area have been colder than normal, and included near-record low temperatures, which created significant and historical conditions in the late December, early January time frame," Lt.-Cmdr. Courtney Hillson said in a phone interview.

"Keeping the ship in Montreal until waterways are clear ensures the safety of the ship and crew, and will have limited impact on the ship's operational schedule."

The 118-metre Freedom-variant Little Rock is described as a fast and agile combat ship that is capable of operating near shore as well as on the open ocean.

It's the second vessel to bear the name, and was commissioned in December alongside its Second World War-era namesake -- a U.S. naval first.

Hillson could not say whether it's common for ships to encounter such long delays, but said previous ships have transited the area in December without trouble.

The ship, she added, has been equipped with temporary heaters and 16 de-icers designed to reduce ice accumulation on the hull.

The crew has also been provided with cold-weather clothing in light of the change to their winter plans, she said.

She said the delay would have "limited operational impact" on the ship and the crew would focus on mission training and certification while it waits to travel to warmer waters.