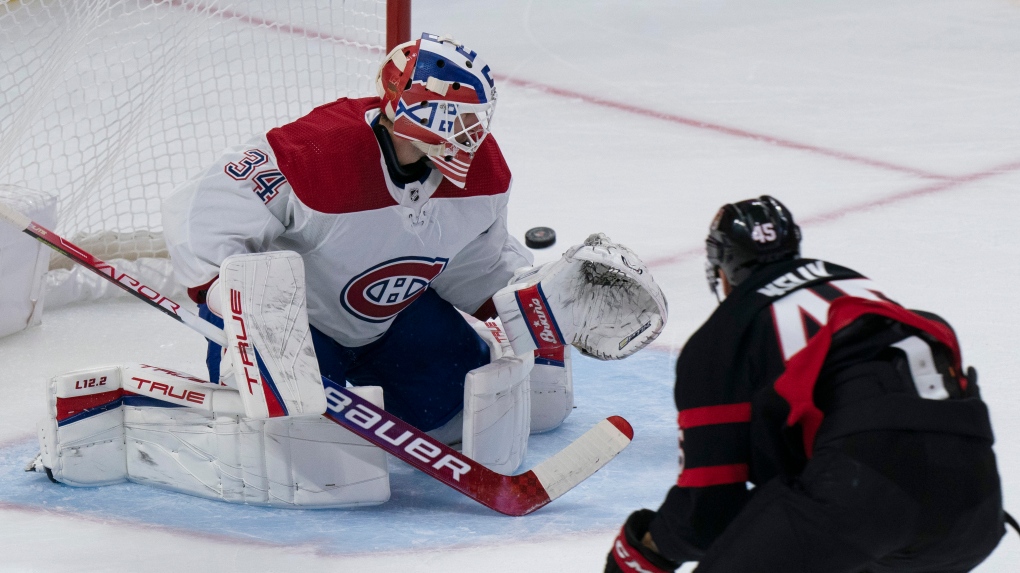 Jake Allen agreed to a two-year extension with the Montreal Canadiens back in 2020 to help alleviate the pressure on star goaltender Carey Price.

He'll be doing that more than ever when the Canadiens start their season Wednesday in Toronto.

Allen is set to begin the 2021-22 campaign as Montreal's starter for at least the beginning of the season. The Fredericton native knew he would fill in for Price early in the season because of an injury, but he will now be getting a lot more work after Price voluntarily entered the NHL/NHLPA player assistance program on Friday.

The minimum leave of absence for those in the program is 30 days, which would make Price available as soon as Nov. 9 when Montreal visits former Canadiens centre Phillip Danault and the Los Angeles Kings. However, it's uncertain if Price will be ready to return at that time.

Price's absence is compounded by the fact that captain Shea Weber is on the long-term injury reserve list and could be out for the entire season.

"With the recent loss of Price and without Shea here as well right now, it's two big losses," Allen said. "This is an opportunity for everyone else to step up and fill their void. You can't replace a Carey Price or a Shea Weber but at the same time you can do the best that you can do."

Defenceman Jeff Petry expressed confidence in Allen and said the goaltender was a big part of the team's run to last season's Stanley Cup final.

"I don't think we'd be in a position to do what we did last year without him filling in for Price when he was injured," Petry said about Allen. "Obviously, Jake is a very good goalie, he's going to make the saves that we need him to make and it's our responsibility to make sure we're playing a strong game in front of him."

With Weber out, Petry becomes the leader on Montreal's blue-line. The Canadiens will also be missing Joel Edmundson for the start of the season with an injury.

Montreal added fresh blood in the likes of former Tampa Bay Lightning David Savard as well as Chris Wideman, who signed on as free agents. Former Winnipeg Jet Sami Niku also joined during the pre-season but will start the season as a healthy scratch.

Despite the additions, Petry understands that it will be a challenge defensively.

"Obviously with those guys being out there are holes to fill," Petry said. "Other teams are going to go through it at different points of the year and for us it happened to be at the start. For us, everyone is going to have to step up a little bit. Everyone will have a little bit more responsibility."

Petry will be teamed up with Brett Kulak on Montreal's top pairing. While Montreal head coach Dominique Ducharme knows that it isn't the ideal situation, he mentioned how the two of them worked well together in the past. Kulak and Petry were paired up when Montreal eliminated the Pittsburgh Penguins during the 2019-20 post-season.

"We know what we're going to get with him," Ducharme said of Kulak. "There are different reasons why last year in the playoffs he wasn't playing at times but that's the situation right now. There's nothing we can change, there's nothing we can do about it. There will be 20 players dressed and it's our job to move forward and compete."

With the return of the Atlantic Division, the Candiens will be taking on the Boston Bruins, Tampa Bay Lightning and Florida Panthers on a regular basis. Ducharme realizes that very few think his team will be able to repeat last season's achievements.

"We're almost in the same situation right now than we were near the end of last season," Ducharme said. "There aren't a lot of people that believe in us so we'll make sure that it changes."

Montreal claimed goaltender Samuel Montembeault off waivers during the pre-season. Ducharme said the plan will be for both Allen and Montembeault to share the action early this season while the team is waiting for Price. "You can't ask Jake to play all the games in October and until Carey comes back," Ducharme said. "It wouldn't be fair or realistic so we'll need both goalies and we trust that those guys will be solid."

AN ABUNDANCE OF WINGERS

Mike Hoffman agreed to a three-year, US$13.5 million deal during the summer but will not start the season due to an injury. Young sensation Cole Caufield will be entering his rookie season after an impressive post-season. They join the already established corps of Tyler Toffoli, Josh Anderson, Brendan Gallagher and Jonathan Drouin, who has rejoined the team following time off from hockey for mental health reasons. The depth of the squad will push veteran Gallagher to the third line, but Ducharme stressed that every player bought into his plan.

Nick Suzuki agreed to an eight-year extension worth $63 million and an annual average of $7.875 million. Initially acquired in the trade that sent former captain Max Pacioretty to the Vegas Golden Knights, Suzuki was humbled by the opportunity to remain in Montreal long-term. "When I was first interviewed when I got traded, I said I wanted to prove Marc (Bergevin) right for wanting me as a part of the deal and I think I've been trying to do that as long as I've been here," Suzuki said.

Montreal acquired Christian Dvorak from the Arizona Coyotes to compensate for the loss of Danault and Jesperi Kotkaniemi, who accepted an offer sheet from the Carolina Hurricanes. Montreal also locked up the two other centremen that occupy their top nine. Jake Evans signed a three-year extension worth a total of $5.1 million with an average of $1.5 million annually.

With the NHL returning to their regular conferences, the Canadiens will renew their rivalries with American teams. Montreal will travel to Boston for the first time since Feb. 12, 2020 to take on the Bruins on Nov. 14. Montreal will wrap up the 2021-22 season with two home games against the Buffalo Sabres on April 26 and the Florida Panthers on April 29.