When the electricity comes back on, Huri Zohrabyan limits the heat to one room, shutting the doors so it can't escape.

It's become part of everyday life in Nagorno-Karabakh, where power outages are a daily occurrence and winter winds are cold.

Zohrabyan is among 120,000 people living in the disputed territory of Nagorno-Karabakh, a landlocked enclave populated mainly by ethnic Armenians but recognized internationally as part of Azerbaijan.

Born in Lebanon but of Armenian descent, Zohrabyan immigrated to Montreal as a teenager. After marrying her husband 2021, she made her way to his homeland: Nagorno-Karabakh, called Artsakh by Armenians.

Soon after, in December 2022, the only road connecting the region to Armenia and the outside world -- the Lachin corridor -- was blockaded by protesters claiming to be environmental activists.

As a result, food, medicine and gas are in dangerously short supply.

Gas is frequently cut off, electricity comes and goes, and health care has taken a serious hit. Schools and many businesses have closed, furthering economic instability.

"It's a survival problem here," Zohrabyan said. "Azerbaijan is creating a humanitarian crisis."

Nagorno-Karabakh has long been a centrepoint of conflict between Azerbaijan and Armenia.

In 2020, the former launched an offensive to take the region, resulting in the Second Nagorno-Karabakh War.

Six weeks of bloodshed ended with a Russia-brokered ceasefire.

Azerbaijan regained control of parts of the disputed territories, and Russia sent a peacekeeping force to maintain order.

According to Anar Jahangirli, board chairman of the Network of Azerbaijani Canadians (NAC), protestors are trying to prevent the smuggling of gold and copper "extracted illegally from Azerbaijan's Karabakh region."

He said the objective is not to restrict civilian traffic, which he says is "being hindered by the Russian peacekeepers and the Armenian administration."

But Zohrabyan and many Armenians believe the blockades are a strategic attack by Azerbaijan on Karabakh's inhabitants.

"Their motive, their goal, is always to do the ethnic filtration of Armenians," Zohrabyan alleged. "I think that's [their] goal, is just to create panic and make it unlivable."

Like many, Zohrabyan has questioned whether she and her husband will stay in Karabakh when the blockades are lifted.

But for now, she doesn't intend to leave.

"If we start to think that this place is a place where we cannot live anymore, then Azerbaijan is going to reach its goal. So yes, sometimes we think that, 'Should we stay here? Should we leave?' But at the end, you know, it's our homeland. We have to fight for it," she said.

"We also have to have faith. We have to hope that everything will be okay." 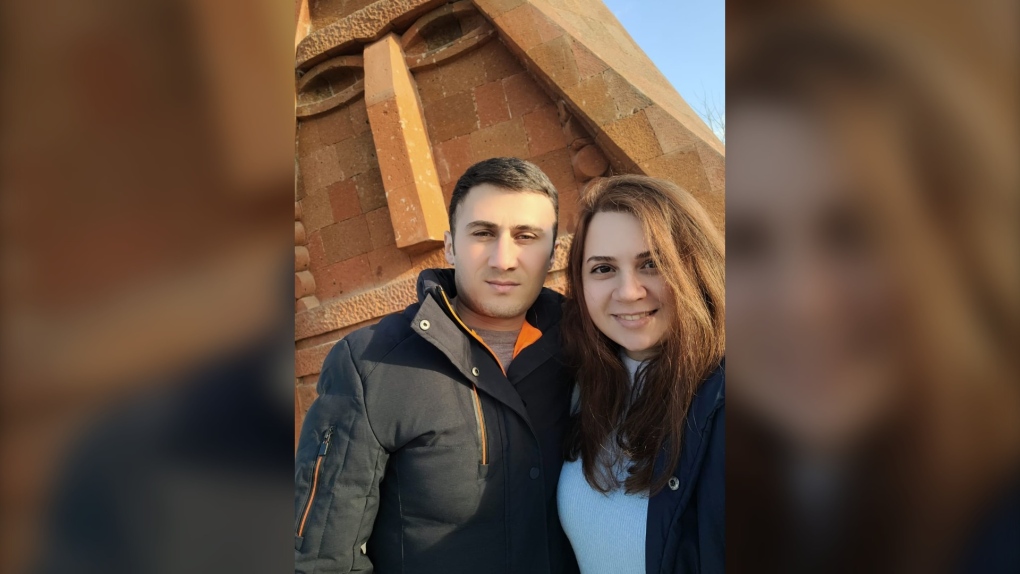 Sevag Belian is the executive director of the Armenian National Committee of Canada.

While Canada has called upon authorities in Azerbaijan to lift the blockade, he says the nation should do more to combat the crisis.

"We expect the Canadian government to ramp up diplomatic efforts to apply that pressure politically and economically, whether that may come into in the form of sanctions or anything else on Azerbaijan," Belian told CTV News.

He said Canada and other nations should act before tensions derail even further, perhaps even by lending aid "on the ground."

"Canada has very, very rich experience in terms of peacekeeping and peacemaking. And certainly, efforts from Canada and like-minded countries would be very much welcomed on the ground," Belian said, noting the shaky state of Russian peacemakers currently serving Nagorno-Karabakh -- the same peacekeepers charged with keeping the Lachin corridor secure.

Meanwhile, Jahangirli of the Network of Azerbaijani Canadians says Canada should "speak with both Azerbaijan and Armenia to encourage them to achieve the fastest resolution of the conflict based on the norms and principles of international law."

In addition, he said Canada should "support demining efforts in the region."

She frequently compares life in Canada to life in Karabakh, and the difference is striking.

"I've seen how people live in Canada. Why [do] people here have to struggle?" she said. "Why [can't] children can have a normal education, why can't they live in peace?"

"After 45 days, the time has come really to [be] more active in this matter. Not only Canada, but the whole world."